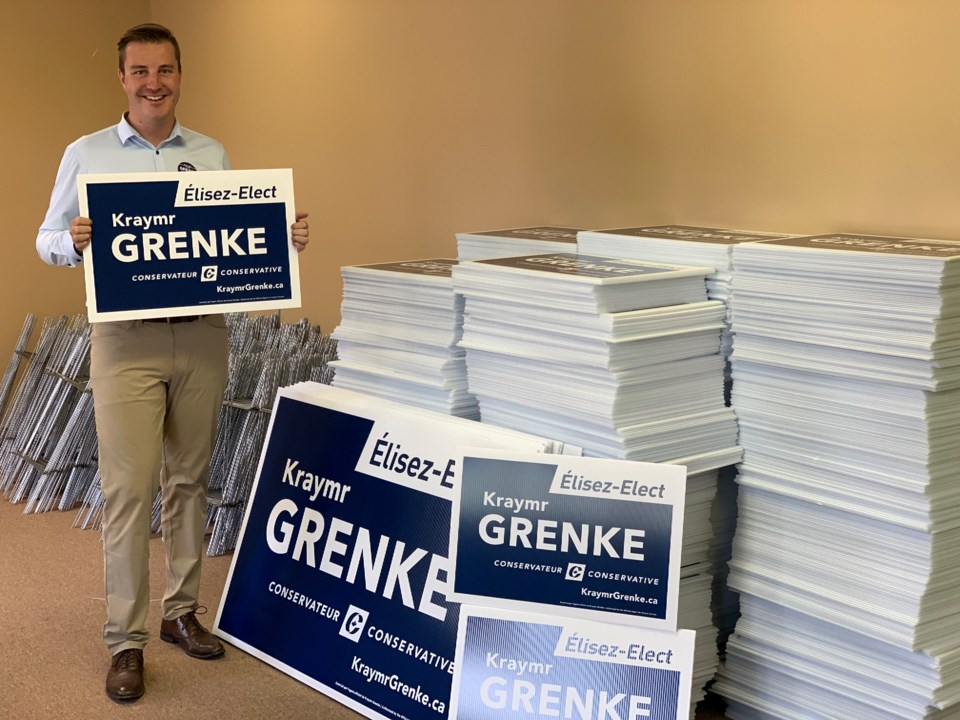 Politics has always been in the cards for Kraymr Grenke. He didn't think he'd be on the ballot so soon, though.

The 27-year-old is the Conservative candidate for Timmins-James Bay in the Oct. 21 federal election.

After the writ dropped, Grenke was quick to get signs out in Timmins.

Putting the first one up at the corner of Highway 101 and 655 was humbling.

“It was kind of a weird feeling to look at it and drive away from it and see that it’s there. Going to check my own name off on election day this year will be a very happy moment because it’ll be a very hard-fought battle at that point,” he said.

Grenke knew he wanted to be a politician to help effect change and move Northern Ontario forward.

Being young and full of energy, now is the right time.

"I got an incredible upbringing here in this region and I want that for the next generation," he said.

"I plan to have a family one day, that’s 100 per cent in my goals... so it’s what can I provide to that generation moving forward. This time felt right as the election cycle went on, I could get behind Andrew Scheer as a leader and as the next Prime Minister. I wanted to run on his campaign.”

Professionally, his most recent job was an economic development officer for Wabun Tribal Council.

He's been a Conservative Party member his entire adult life, and sits on a number of boards locally, including at Timmins and District Hospital, Police Services, Timmins Economic Development Corporation, and Chamber of Commerce.

“Being involved is just something that was in our household, we were always busy doing things. On the politics side, it comes down to just helping. I want to help this region grow, that’s essentially it. It was so good to me, especially Timmins," he said.

If elected, he wants to be a powerful voice.

"Nobody understands the north like a northerner and I think that’s where we need the strongest voice possible in Ottawa," he said.

He noted there are billions of dollars in resources in the gold and base metals coming out of the region.

For forestry, he said "we’re helping build houses everywhere and infrastructure everywhere through the wood that’s harvested through these forests in the Boreal shield. It’s those things that really got me into it."

When looking 15 years down the road, he asks what the region's going to look like.

Everything, he said, ties back to infrastructure, cost of living, and closing the projects that have dragged on too long.

“Because when you look at the community aspect, if you can entice more people to come to Timmins, industry will build here, the tax base will go down because the more industry you can bring to Timmins, it lowers the residential tax base. It all comes together. I think we need to look beyond four years,” he said.

It's still the early days of the campaign. People have been receptive so far, and he's looking forward to the other 20,000 doors he's going to knock on before election day.

“What I’ve been hearing is, you know what, people want change here, they really do. They like seeing a young person being involved, I do come with positive energy,” he said.

To connect with Kraymr Grenke, you can find him on Facebook, at kraymrgrenke.ca, email election@kraymrgrenke.ca or call 705-288-0192.

His campaign office in Timmins is located at 11 Elm St. N.