Conservative and Liberal candidates place second and third in Timmins-James Bay
Oct 22, 2019 7:40 AM By: Wayne Snider 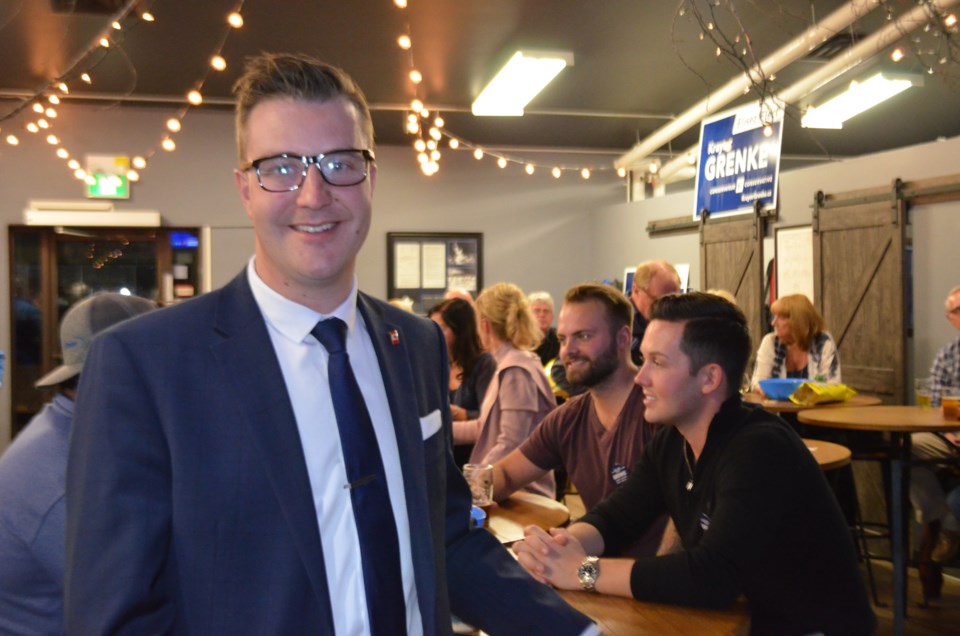 Conservative candidate Kraymr Grenke smiles during the federal campaign wrap up part at Full Beard Brewing in Timmins on Monday night. Grenke said he was pleased with effort of his campaign team and will stay involved in politics. Wayne Snider for TimminsToday

It takes months of planning and many late nights. It involves weeks of travelling around the riding to introduce yourself to voters for support. And it all comes down to one night.

About an hour after the polls closed, NDP Charlie Angus was declared the winner. It was his sixth-consecutive election win in Timmins-James Bay.

While winners celebrate election night, those in second and third place have a chance to reflect on the campaign. Monday was no exception to the rule for political hopefuls placing second and third in the federal riding of Timmins-James Bay.

Conservative Kraymr Grenke and Liberal Michelle Boileau, both young and enthusiastic candidates, had time to reflect on their first federal election campaigns.

The unofficial election results have Grenke in second with about 27 per cent of the vote (9,784 votes), and Boileau in third with 26 per cent (9,457 votes). There is still one poll yet to report.

Grenke and his Conservative supporters gathered at Full Beard Brewing in Timmins to watch the national results on the big screen. Everyone remained hopeful, but the gap between first and second slowly widened as local results came in.

Grenke remained upbeat and spoke with pride about the local Conservative campaign.

“I am very pleased with my campaign team and the effort we put in. We ran a good campaign and everyone worked hard from start to finish. I am very proud of our team. The support I received from friends, family and supporters was tremendous.”

When it was pointed out his vote totals and those of Liberal Boileau combined were ahead of Angus at the time, that wasn’t much of a consolation. But he agreed it might send some small message.

“A little bit,” he said. “A lot of people said they wanted change, but that didn’t happen.”

While he didn’t when his first time out, this isn’t the end of politics for Grenke. He would like to run for office again.

“Definitely,” he said. “I would like to make a difference in our community and believe I can.

“I really enjoyed working with everyone on the campaign team. It was a great experience.”

“I’m a little bit surprised that we went in the same direction as past elections considering what I was hearing out there on the doors and at events,” she said.

When knocking on doors, she said people were reflecting that they're ready for change.

"I think that this won’t be the last of that talk. I’m hoping that in the next few years we’re going to keep moving forward in a new direction,” she said.

With the campaign over, she feels good about it, and said they had a great time and put in a lot of work.

Boileau is on Timmins council, and is looking forward to working with Angus on projects.

“I called Mr. Angus to congratulate him and he himself said that he’s already thinking of a few different projects that we’ll be able to work on together in my capacity as city councillor and with him as Member of Parliament, so it seems like he’s got a few things already in mind that I’m sure I’ll be happy to work with him on,” she said.

With a minority government, it's unclear when the next federal election will be. Boileau's name could be on the ballot again.

She said it's been a great experience and she's passionate about the region. If there's an opportunity to take on the task, she said she'll go for it.

Local students pick Charlie Angus to represent Timmins-James Bay
Oct 21, 2019 10:26 PM
Comments
We welcome your feedback and encourage you to share your thoughts. We ask that you be respectful of others and their points of view, refrain from personal attacks and stay on topic. To learn about our commenting policies and how we moderate, please read our Community Guidelines.