'We can be a better nation' says Angus

After two months and stops all across Canada, Charlie Angus believes his bid for the federal NDP leadership is picking up steam.

"I have travelled across the country, by the end of next week, in seven different provinces," he said at a press conference at Hollinger Park on a windy Friday morning in Timmins.

The longtime Member of Parliament for Timmins-James Bay officially announced he was running for leadership at a shindig he hosted at the fabled Horseshoe Tavern in Toronto on Feb. 26. Since then, the wheels have been fully in motion for the Angus team. He has participated in both official debates thus far, and has gained support from far corners of Canada.

"This first phase of the campaign is to establish people on the ground in every part of this country," said Angus.

"What I've been hearing from people, its really interesting, across the country there's a real concern that outside of Ottawa, its not 'sunny ways' (a Trudeau slogan) the rise of growing economic insecurity across the country. People who are working in endless cycles of contract work, unable to get pensions, not having the possibility of permanent work. What we're seeing is the disappearance of the traditional middle class in Canada, and the rise of a new working class, which is both white collar and blue collar. We need a government and a leader that's willing to start putting these issues on the map, the way our present Prime Minister isn't," said Angus.

He said his team has had 'enormous success' building the base across Canada so far, and thanked his supporters in Timmins and Northern Ontario.

"This is going to be a long leadership race," said Angus, who added that he's spoken with lifelong Liberal and Conservative voters who told him he'd have their vote if he won the party's top position.

He said his campaign is moving into its second phase, with mobilizing team members in communities across the country, with a strong emphasis on Northern Ontario.

Angus has travelled to Montreal, and other communities in Quebec, on Vancouver Island, to Nova Scotia, and Manitoba.

"This week I'm going to be going down to Sudbury, North Bay, then out to Edmonton, Red Deer, and Regina," he said.

His early campaign rhetoric centres around the middle class. 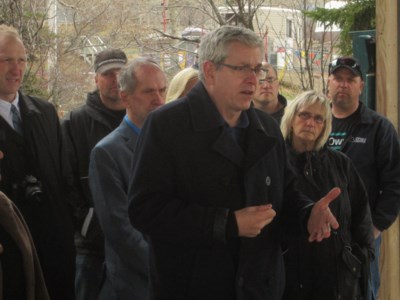 Angus was joined by several supporters who both figuratively, and literally stand behind him. Andrew Autio for TimminsToday

"The gaps between the super rich and the rest aren't nearly as extreme in Canada, but if we don't start to address that in practical ways, we could start to see a real growing disenchantment in our country. I don't want to see that, I don't want the politics of division."

He said he has learned that across the country, what brings Canadians together is so much greater than what divides them.

"Canadians have such an incredible sense of openness, a sense of fairness. We have the natural resource to do it, we can be a better nation," said Angus.

Above all, Angus said he is steadfastly against ugly, political mudslinging, and is proud that the NDP debates have a more civil nature than most.

"We have such opportunities here. Let's stick together, let's work together, let's not get thrown off the by the false politics of political arsonists like Kellie Leitch. She doesn't speak for working people, we do as New Democrats, and we're going to remind people that building communities, and building a nation that is positive, is something that is very much in our political and social DNA as a country," he said.

He told TimminsToday that the most overlooked issue in Canada right now is the millions of unstable employment situations.