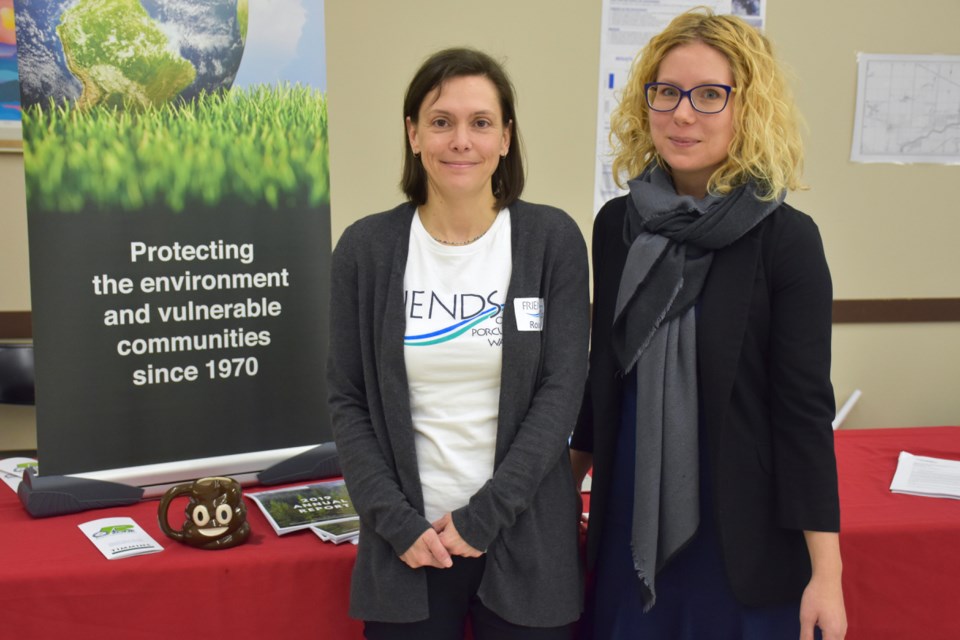 People had the chance to learn more about what's happening at Porcupine Lake this week.

In Porcupine and South Porcupine, when the system’s capacity is exceeded sewage is bypassed into Porcupine Lake.

Upgrading the system is required for the city to meet a Ministry of Environment and Climate Change (MOECC) director’s order, and there is a two-phase project to remediate it.

The pricetag for the phase one — building Pumping Station 4 and installing two stormwater equalization tanks at a site on Highway 101 just east of the Whitney Arena — is more than expected, and is anticipated to be functional in the fall.

Phase two is upgrading the mechanical, electrical and instrumentation systems, along with other work, at the remaining five pump stations. That work is expected to be done by the spring.

To clean up the lake and its watershed, FPRW has been working with CELA, a non-profit specialty law clinic.

CELA northern services counsel Kerrie Blaise was at this week's open house to support the group and the public.

She said people were asking the perfect questions — whether the lake is good for swimming, drinking or fishing.

“When those questions can’t be answered in the affirmative and with confidence then we know there’s a lot more work to be done," she said.

“There’s a lot of concern as well, people have observed changes over the years and they’re asking questions. There is, I would say, quite a high level of concern and not a lot of action and information available yet. Hopefully this is one way to start that conversation."

As a legal aid organization, Blaise said they look for ways to advance environmental justice.

She said everyone has the right to know what's in their water, air and community, whether it's pollutants, toxics or good things.

"We are a member of the PLC and through that, that’s one way we’re trying to get at that information to understand do we study the health of the lake, is that data available to people so when there is a discharge into the lake do people even know? We have made some headway in that regard so that the public health unit is now posting when there is a discharge into Porcupine Lake, but what would be even better is realtime monitoring posted online. The City of Kingston does it and it would actually alert people to when those discharges are happening, so then that veil of secrecy or people not knowing what’s going on is removed," she said.

"And then ideally the more awareness people have about what’s going into the lake, it raises awareness, but also accountability from public officials, whether it be municipal or provincial. And we know with Porcupine Lake there’s been years and years of non-compliance with provincial orders to actually upgrade the sewage system and it hasn’t occurred. Until that’s fully done we still have these discharges going into the lake, so we’re here to elevate the public voice and let them know of their environmental rights."

Roxanne Filion is a director with the FPRW and said she joined the group to give back and try to keep the lake clean.

Over the last five years, she said 186 different species of birds have been tracked that either live there or stop by while migrating.

“I think learning to appreciate, identify and understand the wildlife that lives around us is one of the first steps in getting involved with wanting to protect it. So with the Friends, we want to start events that will educate and make people appreciate the nature more - that way they’ll be more inclined to protect it later,” she said.

At the open house, she said it was nice to talk to residents interested in what's going on.

“People are happy that we’re doing this because we’re finally talking about it. People are a little disappointed in the fact that it was polluted for so long and not talked about,” she said. “They’re finding that people are starting to take it seriously.”