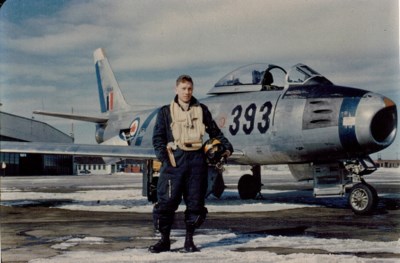 Ernie was born in Dauphin, Manitoba on April 1, 1930 to Frederick and Kathleen (Sarkonak) Koshowski. Following his graduation from Saltfleet High School, Hamilton, Ontario, Ernie joined the Royal Canadian Air Force and completed his Jet Training in Chatham, New Brunswick. It was here that he met his wife, Joyce Cassidy of Timmins, Ontario. They were married June 26, 1953 and began married life in Baden-Baden, Germany where Ernie was the pilot of an F-86 Sabrejet and a member of 444 Combat Support Squadron of the Royal Canadian Air Force.

Ernie and Joyce were subsequently stationed in Trenton, Ontario, Montreal, Quebec, and Saskatoon, Saskatchewan before leaving the service and settling in Timmins in 1957.

It was here that Ernie worked for Austin Airlines, Shell Canada and the Ministry of Natural Resource (MNR) before relocating to Thunder Bay to complete his career as the Fire Bomber Manager for the MNR retiring in 1995.

Ernie was a very active man who received a degree in Geology from Laurentian University in 1981 while enjoying his many hobbies which included downhill skiing, gardening, photography, woodworking and art matting and framing.

Ernie was predeceased by his wife Joyce in 1995, his daughter Camie in 2011, and his grandson Scott in 2013. Ernie is survived by his daughter Caryn of Brandon, Manitoba, his son Shawn (Chris) of Chapel Island, Ontario, one sister, Dolores Shaw of Hamilton, two grandchildren, Samantha of Ottawa, and Eric (Shelby) of Sault Ste. Marie, Ontario.

As per Ernie’s wishes, services and internment will be private.

Memories and Condolences
We welcome your feedback and encourage you to share your thoughts. We ask that you be respectful of others and their points of view, refrain from personal attacks and stay on topic. To learn about our commenting policies and how we moderate, please read our Community Guidelines.