VANCOUVER — Endless class and mind-bending goals — that's what Vancouver Canucks fans say they love and will miss the most about Daniel and Henrik Sedin.
Apr 5, 2018 10:19 PM By: Canadian Press 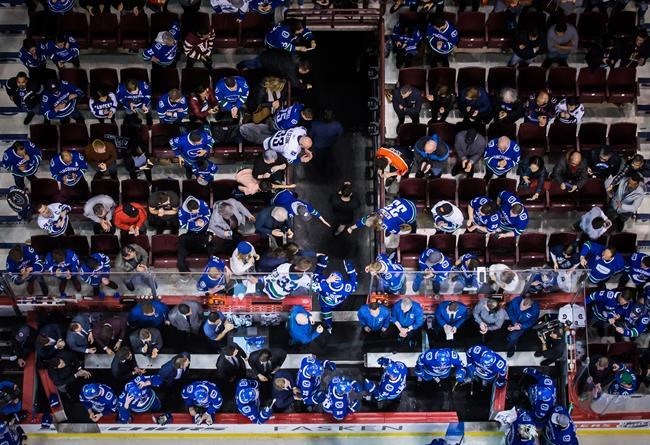 VANCOUVER — Endless class and mind-bending goals — that's what Vancouver Canucks fans say they love and will miss the most about Daniel and Henrik Sedin.

As the 37-year-old twin brothers prepared to take the ice in their final home game on Thursday, fans gathered outside Rogers Arena, many dressed in blue Canucks jerseys emblazoned with the Sedins' numbers, 22 and 33.

Some spoke animatedly about their favourite goals, while others talked about meeting the brothers through their tireless work in the community.

Martin Ogley, 61, has been a Canucks fan since the team entered the league in 1970.

The team has a number of bright young stars coming up, but watching the Sedins play in Vancouver for the last time will be emotional, Ogley said before the game.

There's something special about the Swedish brothers, he added.

"Everybody says they have an aura about them, they're just down to earth," said Ogley, who met Henrik Sedin at an amusement park last September. "He's quite a bit taller than he looks on TV."

Vincent Kwong, 21, bought tickets last December to the game, just in case it turned out to be the twins' last appearance.

The Sedins have been huge role models in the community, he said, and they've taken fans on an emotional roller-coaster over the years.

"There are so many memories in the 2011 (Stanley Cup) run," Kwong said. "It was just so close. I know they were probably so devastated, so hopefully we can show them some love today."

Ameena Althullah has been watching the Sedins play since she was little and the 23-year-old still remembers watching Daniel Sedin score an unbelievable goal against the Calgary Flames in 2010, a point that earned him a hat trick.

"That beautiful goal, in between the legs. Can't forget it," she said.

Althullah said the game would be emotional for her.

The Sedins' last game was a family affair for Susan Young, who brought her three daughters. The girls made signs thanking the brothers for their time with the Canucks.

"I feel like it's a privilege to have ever watched them play here," Young said. "It was a privilege that they came to Vancouver and we could watch such talent. It was just crazy ... They just have this uncanny ability to play like no other."

Every goal the brothers scored was special, said 10-year-old Anna Young. She expected to be in tears by the end of the game.

"I'm going to be like 'I can't believe it's their last game!' I thought they were going to play forever and ever and ever."

Hockey has been a passion for Jess Succamore since 1952. He watched his first game three weeks after arriving in Canada from England.

"I fell in love with the game, " he said. "Can't stand up on ice skates, but really appreciate good talent. And the twins are the best, as far as I'm concerned."