LAS VEGAS — After losing in the Stanley Cup Final last June, the Vegas Golden Knights looked to bolster their forward depth by trading for Max Pacioretty and signing Paul Stastny before the season. At the trade deadline, they dealt for Mark Stone.
0
Apr 15, 2019 2:26 AM By: Canadian Press 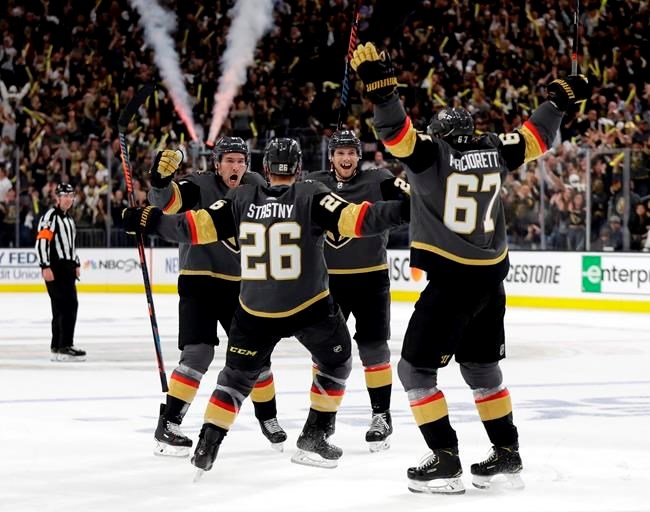 LAS VEGAS — After losing in the Stanley Cup Final last June, the Vegas Golden Knights looked to bolster their forward depth by trading for Max Pacioretty and signing Paul Stastny before the season. At the trade deadline, they dealt for Mark Stone.

Those moves that formed one of the most productive lines in hockey paid dividends Sunday night.

Stone had three goals and two assists, and the Golden Knights beat the San Jose Sharks 6-3 to take a 2-1 lead in their first-round playoff series.

Stastny had two goals and three assists, and Pacioretty had a goal and an assist as Vegas captured another high-scoring matchup with San Jose. Shea Theodore had three assists and Marc-Andre Fleury made 25 saves.

"We know we have more to give and we want to contribute for our team," said Stone, who leads the league with six goals in the playoffs. "Obviously, we're adding matchup problems for other teams and we just want to continue to play our game and not stray away from it. As a whole, we're trying to make sure we're playing consistent."

Stastny, who leads the league with six assists in the , is tied with Stone for the league lead with eight points. Pacioretty sits third with six points.

"I think we're creating a lot of chances off turnovers, and that's the key to our success," Stastny said. "We're not the fastest line, but we have good sticks, we have good anticipation, we know how to read each other."

The Golden Knights and Sharks scored 15 times while splitting the first two games in San Jose. Game 4 of the best-of-seven series is Tuesday night in Las Vegas.

After getting outplayed in Game 1, the defending Western Conference champs have used their physicality to dominate the last two games, outhitting the Sharks 46-31 in Game 2 and 56-42 in Game 3.

The Golden Knights also used fast starts to set the tone, scoring a goal inside the first 36 seconds of each of the three periods.

Vegas got off to a fast start when Nate Schmidt went blue line to blue line with a perfect feed through traffic to Stone, who beat Jones with a backhand just 16 seconds into the game. Pacioretty's wrist shot from the top of the right circle at 12:16 extended Vegas' lead to 2-0.

Stastny accounted for both of Vegas' goals in the second as the Knights opened a 4-1 lead, including one just 21 seconds into the period, when he grabbed a rebound between the circles and drove a wrist shot past Jones. Later, he got into a perfect position to redirect a feed from Stone into the net at 16:04.

Stone scored just 36 seconds into the third, when he buried a rebound into a wide-open net, pushing Vegas' lead to 5-1.

"We found a way to get a couple goals early, and we carried the momentum a lot," Vegas coach Gerard Gallant said. "It was a physical game, we played real disciplined and that's what my main concern is, we didn't take a whole lot of penalties tonight and I thought we played a great game."

San Jose quieted the crowd and put Vegas on its heels when it rallied in the third with a pair of goals to get within two.

Couture got his second of the series when his pass intended for Joe Pavelski was tipped in by Vegas Brayden McNabb. Then, Meier knocked in a rebound after Gustav Nyquist's shot was stopped, making it 5-3 with a little more than 14 minutes remaining.

"I don't think we had enough participants playing at a high enough level. ... The one thing about our group is they don't quit," San Jose coach Peter DeBoer said. "They haven't, regardless of the scoreboard. That's something we can hang our hat on. (But) we didn't do enough to win tonight."

Stone got his third goal when took a pass from Pacioretty, skated in alone and went forehand-backhand to beat Jones with a little more than six minutes to play.

NOTES: The Golden Knights signed forward Nikita Gusev to a one-year, entry-level contract and expect the Moscow native to join the team for practice on Monday. Gusev, 26, had a Kontinental Hockey League-high 82 points in 62 regular-season games. During the KHL playoffs, he recorded 19 points, which ranked second in the league. ... The Golden Knights are the 13th team in NHL history, and third in the last 30 years, to score in the opening minute of back-to-back playoff games. ... Vegas is the first franchise in NHL history to hold a lead in each of its first five all-time playoff series. ... San Jose LW Michael Haley left in the second period after injuring his left ankle on a blocked shot and did not return.

Canadian snowboarder Blouin wins World Cup gold in women's slopestyle
Feb 16, 2020 5:49 PM
Comments
We welcome your feedback and encourage you to share your thoughts on this story. We ask that you be respectful of others and their points of view, refrain from personal attacks and stay on topic. To learn about our commenting policies and how we moderate, please read our Community Guidelines.