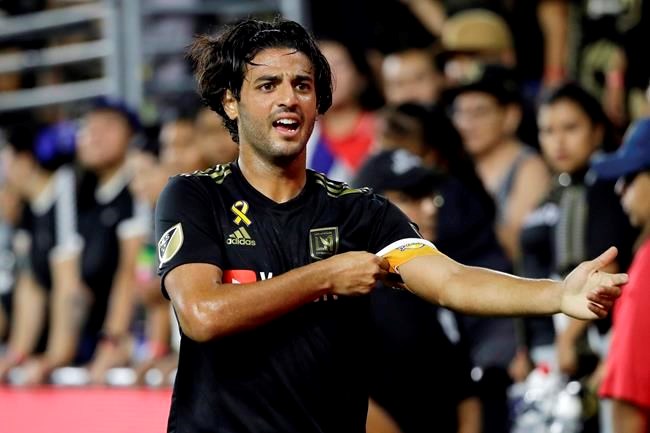 Vela announced his decision Monday, citing his concern for the health of his family, including his pregnant wife, Saioa.

“I always want to give everything I have to my club, our fans and supporters and the city of LA,” Vela said in a statement. “However, it is in the best interest of the health of my family to stay home and be with my wife during what is a risky pregnancy. I will miss being with my teammates and coaches, but I will be cheering and supporting LAFC from a distance.”

LAFC general manager John Thorrington said Vela expects to rejoin the club when it returns from the tournament in Orlando. LAFC announced Vela's decision shortly before the team was scheduled to fly to Florida.

“We stand behind Carlos,” LAFC coach Bob Bradley said. “It’s important for him to be with his family right now. All of his teammates and the coaching staff feel the same way. We always have a mentality that we do what's best for players, what's best for families, and that doesn't change.”

The absence of Vela is the latest blow to the MLS Is Back tournament, scheduled as the league's return to competition amid the coronavirus pandemic. The first game of the event had to be postponed when six FC Dallas players tested positive for the virus, and other positive tests have popped up around the league while teams headed to Florida, where the virus is spreading rapidly.

Bradley said he doesn't plan to change his formation or strategies without Vela leading the attack, even though backup forwards Adama Diomande and Bradley Wright-Phillips likely aren't ready to play a full 90 minutes after missing time with injuries earlier in the year.

Vela was the first player signed by the 3-year-old expansion franchise, and he has been its cornerstone during its immediate rise to MLS prominence.

Vela scored two goals in the first two games of this season before the pandemic forced the suspension of competition.

The Mexican forward was coming off the most spectacular offensive season in MLS history, setting league records with 34 goals and 49 combined goals and assists in 2019. He led LAFC to the Supporters' Shield as the league's top regular-season team.

Raptors Uprising completes perfect regular season with 16th straight esports win
Aug 7, 2020 9:28 PM
Comments
We welcome your feedback and encourage you to share your thoughts. We ask that you be respectful of others and their points of view, refrain from personal attacks and stay on topic. To learn about our commenting policies and how we moderate, please read our Community Guidelines.