CALGARY — Football players prefer to call them pre-game rituals rather than superstitions, but some Winnipeg Blue Bombers and Hamilton Tiger-Cats players are particular about what they do in the hours before kickoff. The 'rituals' can be quirky.
Nov 22, 2019 4:56 PM By: Canadian Press 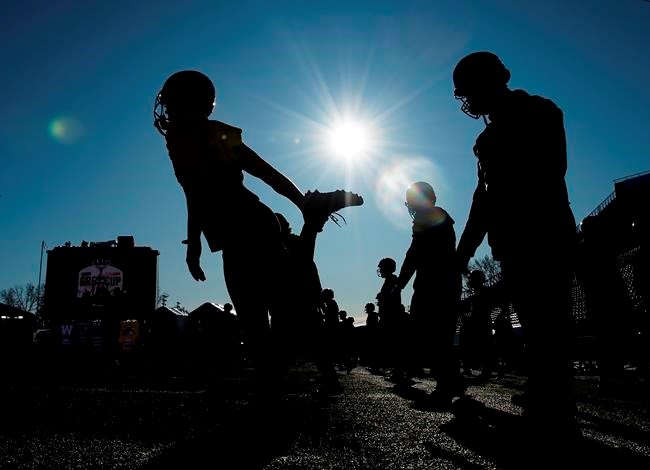 CALGARY — Football players prefer to call them pre-game rituals rather than superstitions, but some Winnipeg Blue Bombers and Hamilton Tiger-Cats players are particular about what they do in the hours before kickoff.

The 'rituals' can be quirky.

"I just eat a Snickers before every game and tie my left shoe before I tie my right shoe," Hamilton receiver Brandon Banks, the CFL's most outstanding player, said as his team prepared for Sunday's Grey Cup against Winnipeg.

"Actually that's weird to hear him say that because I'm a Skittles guy," Ticats quarterback Dane Evans chimed in.

"And I always do my right shoe before my left shoe and I gotta put my pants on like immediately after the tights so it's tights, pants, shoes and then everything else follows."

Others could be considered absurd.

"Previously I used to have these underwear that my ex-wife used to give me. It was lucky underwear. They're not lucky anymore," deadpanned Ticats cornerback Delvin Breaux.

"What I like to do with my shoes — I always have to have (wrap the laces) at least two or three times around before I actually loop it. It has to be that. If it ain't that. It ain't right."

Some others are sentimental.

Before kickoff, No. 33 also says a prayer on the 33-yard line for his late friend and junior football teammate Aaron Niedergesaess, who died in a car crash in 2008.

"That's something I definitely do every game," Harris said.

"I used to wear No. 20 when I was in junior and then I switched my number to 33 after he passed away. That was his number and I've been wearing it ever since."

Harris said he will also have his legs massaged before a 45-minute stretch, followed by a half hour of quiet time during which he'll close his eyes and visualize the game.

Harris then chats with teammates as they trickle into the locker room. His equipment goes on and his ankles get taped followed by another few minutes of introspection.

"A lot of relaxing," Harris said. "For me, I like to be nice and calm before the game. That's why I like to get there early and not get rushed."

He wants to be the first player to return to the locker room after warmup, so he'll have time to tweak his equipment.

"I'm very particular about my feet," Harris explained. "I'll put my cleats on and if my socks don't feel right then I'll change my socks out.

"If my feet don't feel 100 per cent, that's one thing I'm kind of finicky about.

"My ankles get taped so if my ankle doesn't feel right when I go run out, sometimes I'll get an ankle taped three different times to make sure it's right. That's maybe a little bit of a superstition."

His Bomber teammate Nic Demski arranges his gear in his locker before a game, and dresses his left side before his right.

"I know some people who wear the same underwear and eat the exact same meal. I'm nothing like that," the receiver said.

"I make sure all my apparel, everything I'm going to be wearing in the game is all hung up in my locker. Make sure my pants are good to go, which cleats I'm going to wear.

"I just like to organize my locker so I don't have to worry about it. Everything is smooth."

"Before I come out and do my little walkthrough and things like that, before coach gives his breakdown and everybody starts to meet and everything, I call my wife and my daughter and we pray real quick," Jefferson said.

This report by The Canadian Press was first published Nov. 22, 2019.