WINNIPEG — Kamar Jorden said during training camp that he wanted people talking about him as one of the best receivers in the CFL. He should be causing some chatter now.
Jul 8, 2017 2:31 AM By: Canadian Press 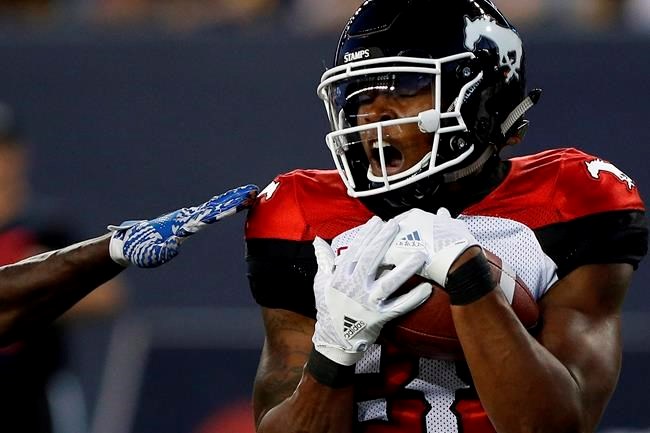 WINNIPEG — Kamar Jorden said during training camp that he wanted people talking about him as one of the best receivers in the CFL.

He should be causing some chatter now.

"I feel like I'm getting to it," Jorden said. "But I've got a lot of work to do to even be considered to be one of the top guys. I feel I've got a good start."

He scored on a one-yard run early in the second quarter and grabbed a 21-yard pass in the end zone from Bo Levi Mitchell to start the fourth quarter for a 26-10 lead.

Jorden, 28, is in his fifth season with the Stamps (2-0-1) after spending the first year on the practice roster. His five TDs surpass the three he had in nine games last year.

Calgary's victory, which included shutting out the Bombers in the second half, continued the club's dominance in Winnipeg.

The Bombers haven't defeated the Stampeders at home since July 10, 2009. Calgary has won 17 of its last 18 games against Winnipeg, including the last seven in a row since 2015.

The Stampeders scored 16 points off Winnipeg (1-1-0) turnovers in front of 30,165 fans at Investors Group Field.

"Overall, I felt like I was seeing things extremely well," Nichols said. "That's why this position's so tough. Really two bad plays in my opinion that I made and both costly."

Nichols was intercepted by Calgary linebacker Maleki Harris, who returned the pick 23 yards for a TD midway through the third quarter.

Rene Paredes hit field goals from 17, 20 and 30 yards, was wide from 44, and booted two converts. His first field goal came after a Nichols interception.

Winnipeg receiver Julian Feoli-Gudino caught a 20-yard TD pass and kicker Justin Medlock was good on a 24-yard field goal, extending his career-high streak to 24. He also made one convert.

Bombers defensive back T.J. Heath had a pair of interceptions, including one that nixed a Calgary two-point convert attempt.

"A lot of communication things," Heath said of his team's shortcomings. "Missing tackles, just simple things that can easily be fixed."

Calgary led 3-0 after the first quarter, but Winnipeg had the 10-9 edge at halftime.

The first half featured four turnovers, three by the Bombers, and five attempts by Calgary to score from the one-yard line.

"I've got to play better. Make better reads and just let the ball rip," Mitchell said. "That's what happens in that second half, is just being confident, letting the ball rip, letting the receivers go make plays."

Nichols overthrew L'Damian Washington in the end zone and Stamps defensive back Joshua Bell picked him off and ran out of bounds.

Mitchell was then intercepted by Maurice Leggett, but Leggett was flagged for illegal contact on a receiver. Paredes finished the drive booting the 17-yarder at 13:00 of the first quarter.

Winnipeg's next possession was a turnover on downs, but Paredes' field-goal attempt from 44 yards was wide left. Bombers receiver Ryan Lankford ran the ball out, but then fumbled and Calgary took over at Winnipeg's 41-yard line.

After running back Jerome Messam got the Stamps to the one-yard line, back-up quarterback Andrew Buckley was stuffed. He then threw an incompletion that would have been a turnover on downs if not for Winnipeg being offside.

Buckley and Messam were both stopped and Jorden finally ran across the goal line at 4:42 to make it 9-0. Mitchell's two-point convert pass was intercepted by Heath.

"Miserable, wasn't it?" Mitchell said of the series. "Oh my gosh. I mean, as an offence it's demoralizing when you're not putting the ball in from one yard. It should be easy to get one yard."

Heath then snagged his second interception. After a successful coach's challenge for pass interference, Feoli-Gudino made his TD catch at 8:38 and Medlock's convert flipped the score 10-9 for the home team.

The Stampeders lost two more defensive linemen, Kashawn Fraser on their first play of the game and later Aston Whiteside. Punt returner Tunde Adeleke was also injured in the first half.

"If you can play (defensive) end, give me a call," Calgary head coach Dave Dickenson quipped.

Note to readers: This is a corrected story. A previous version said that Calgary lost James Vaughters to injury