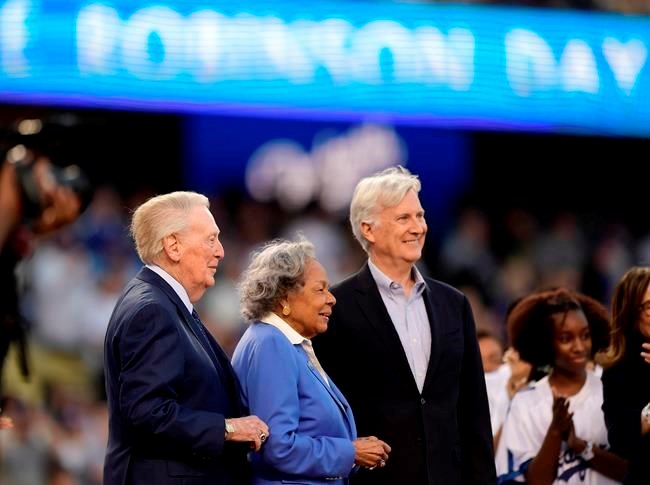 Scully greeted 96-year-old Rachel Robinson with a kiss after being introduced to the crowd, with Scully drawing the loudest cheers in a rare public appearance.

He stood behind Rachel with his hands holding her arms during the national anthem at Dodger Stadium. They were joined by Robinson's daughter, Sharon, and son, David, who linked arms with their mother as they walked on the field.

Robinson became the first black player in Major League Baseball with the Brooklyn Dodgers on April 15, 1947. Scully began calling the team's games three years later, and the now-retired Hall of Fame announcer was friendly off the field with the man he called "Jack."

Only 7.7% of current MLB players are black, according to MLB.

"If not for Jackie Robinson, I probably wouldn't be here today playing baseball in the United States," said Cincinnati Reds outfielder Yasiel Puig, who came from Cuba to chase his pro aspirations. "That's the reason we respect this day."

His No. 42 was worn by every major leaguer Monday. The number was retired around the league in 1997.

"For me, it's a big opportunity and responsibility that I hold very dear to my heart," Dodgers manager Dave Roberts said. "To put this uniform on today and wear that number today, 42, it's always special."

"To this day I still read about him," Black said in San Diego. "What a pioneer. What a great example of a human being and what he meant to our country, and in the bigger picture, what he meant for all of us culturally, not only in baseball, but in society."

"That's probably one of the people in baseball I wish I would've met," he said.

At Dodger Stadium, the pregame ceremonies included 42 current and former Jackie Robinson Foundation scholars. Students from Cleveland Elementary, Washington Middle School and John Muir High — all attended by Robinson while growing up in nearby Pasadena — were on hand.

Robinson's No. 42 was cut into the field grass.

The Robinson siblings each tossed out first pitches. David's was a strike to Roberts, while Sharon's bounced on its way to catcher Russell Martin.

The Dodgers hosted an invitation-only 100th birthday celebration in the Stadium Club featuring a sneak preview of the Jackie Robinson Museum, set to open in December in New York City.

Dodgers closer Kenley Jansen and former Dodger Matt Kemp, now with the Reds, came out to home plate to pose with Scully and the Robinson family before the game.

Missing from this year's LA ceremonies was Don Newcombe, the third black pitcher in the major leagues when he was with the Brooklyn and later Los Angeles Dodgers. He and Robinson were among the first four black players named to an All-Star team. Newcombe died in February at age 92.

"It's tough to watch it," Anderson said. "But it's brave on his part, for him to be that guy to go through that and just be a leader and basically break the barrier. A guy that I look up to and a guy that motivates me."

"It takes a special person, a special man to go about it, to take as much backlash as he did and still did that in a professional manner," Mariners infielder Tim Beckham said. "It speaks a lot about Jackie Robinson."

Major league players made a $100,000 grant to the Jackie Robinson Foundation in of his 100th birthday. It helps fund the college scholarship program run by the foundation, which was founded by Rachel Robinson.

Newman released from hospital; Chastain to race Las Vegas
Feb 19, 2020 10:52 PM
Saprissa, Impact draw 2-2 in first leg in CONCACAF Champions League
Feb 19, 2020 10:03 PM
Comments
We welcome your feedback and encourage you to share your thoughts on this story. We ask that you be respectful of others and their points of view, refrain from personal attacks and stay on topic. To learn about our commenting policies and how we moderate, please read our Community Guidelines.