ANB Futbol academy director Bassam Naim was on the phone Sunday with Everton scout Ian Lavery, both glued to the TV as Canadian teenager Daniel Jebbison made his first start for Sheffield United in England's Premier League.
May 17, 2021 5:45 PM By: Canadian Press 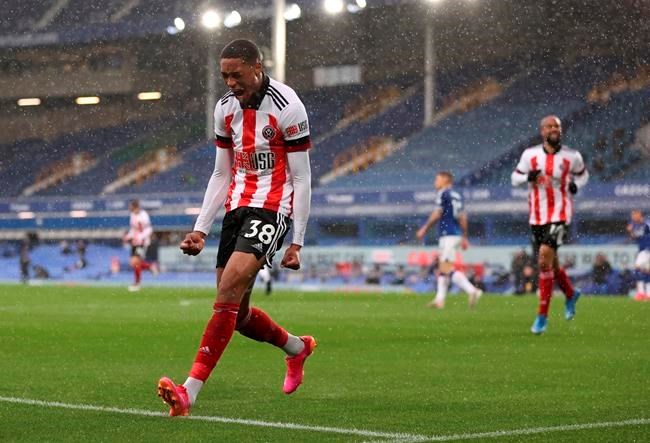 ANB Futbol academy director Bassam Naim was on the phone Sunday with Everton scout Ian Lavery, both glued to the TV as Canadian teenager Daniel Jebbison made his first start for Sheffield United in England's Premier League.

"He (Lavery) said 'I don't know if I should cry or laugh because he's playing against us,'" said Naim, who had Jebbison at his suburban Toronto academy from age six to 14.

"I said 'Well I hope you cry.' And then two minutes later he scored. It was just unbelievable."

Naim was so excited, he lost grip of his phone when he threw his arms up to celebrate, sending it crashing into the wall.

At one point, Everton had been interested in Jebbison. But he ended up at Sheffield United.

And on Sunday, Jebbison became the youngest player in Premier League history — at 17 years 309 days — to score on his first start in England's top tier in a 1-0 win at Everton.

"II was so excited and ecstatic it brought a tear to my eye," said Naim. "I'm not lying. It was a moment of a lifetime for me. And obviously, first, for the kid. It's an unbelievable achievement."

The goal came in the seventh minute at Goodison Park with Jebbison, reading the play perfectly from his position in front of goal, getting his right foot to a low, hard Jack Robinson cross to knock the ball in.

Jebbison also became the youngest to score a game-winning goal in a Premier League match since Federico Macheda (17 years 232 days) for Manchester United against Sunderland in April 2009.

For the moment, Canada Soccer looks on with envy. Jebbison played for the England under-18 team in March although he has received invitations from Canada Soccer, according to Naim who has served as an intermediary.

As a youth international, Jebbison is not tied to England, however. Canadian teenager Theo Corbeanu, who coincidentally made his Premier League debut for Wolves off the bench on Sunday in a 2-0 loss at Tottenham, is a former Romanian youth international who now wears the Maple Leaf.

Corbeanu, a winger from Hamilton who has won two caps for Canada, celebrated his 19th birthday Monday with a pair of highlight-reel goals in the Wolves under-23 side's 3-2 extra-time loss to Crystal Palace in the Premier League 2 Division 2 playoff semifinal.

Listed at nearly six foot three and 165 pounds, Jebbison is "a force to be reckoned with," according to Naim.

"Athletic, strong. Always creative when he was with us ," said Naim. "Lots of energy … He loves to go forward. He loves to take on players."

Jebbison's story is a family affair.

Daniel is the youngest of three brothers (along with Micah and Jonathan) who came up through the ANB Futbol academy in King City before the family, at Naim's suggestion, left Milton, Ont., for England to pursue the boys' football dream.

Jonathan, the oldest brother, was the first to draw attention from English clubs, with a pair of invitations from Wolves. Micah, the middle brother, was invited to a Canadian under-15 camp in 2016.

"Everton was very serious about his older brother at one point," said Naim. "And that's where the relationship with Everton started."

Jebbison's father Patrick was an accomplished athlete in his own right, named the top Canadian university basketball player in 1987-88 and 1988-89 while at Brandon University. He led the Bobcats to three straight national championships (1987, '88 and '89) and played for Canada at the 1989 World University Games and 1991 Pan American Games.

His mother Christine was a talented track athlete, according to Naim.

The family bloodlines allowed for a British passport so the family of six — they also have a daughter Sarah — moved to England some four or five years ago. Christine came first, getting a job in banking, with Patrick following.

Daniel Jebbison went over in 2017 with an ANB Futbol team and played Sheffield United among other teams at the Youdan Trophy, an international youth tournament staged in Sheffield. When the tour was over, he stayed in England with his mother in their new home in Derby.

Naim looked to Derby County as a possible team for Jebbison. Then Jebbison went to Everton along with Micah for a tryout.

Lavery, a longtime member of Everton's recruitment department, was interested but could not convince the coaches, according to Naim. There was interest from other clubs with Sheffield United eventually snapping Jebbison up after spotting him at a talent ID camp.

The Blades kept him on a tryout through 2018, when he played for Sheffield United against ANB Futbol in the same tournament as the previous year. After a stint in the academy, he signed as a scholar — which opens the doors for players aged 16 to 18.

Jebbison worked his way up through the ranks, playing for Sheffield United's under-18 and under-23 teams. Earlier this season he was on loan with Chorley of the National League North, the sixth tier of English soccer.

But the Blades, who are returning to the second-tier Championship next season after being relegated, are now looking to the future. Sheffield United handed Jebbison his Premier League debut off the bench May 8 in a 2-0 loss to visiting Crystal Palace.

This report by The Canadian Press was first published May 17, 2021.