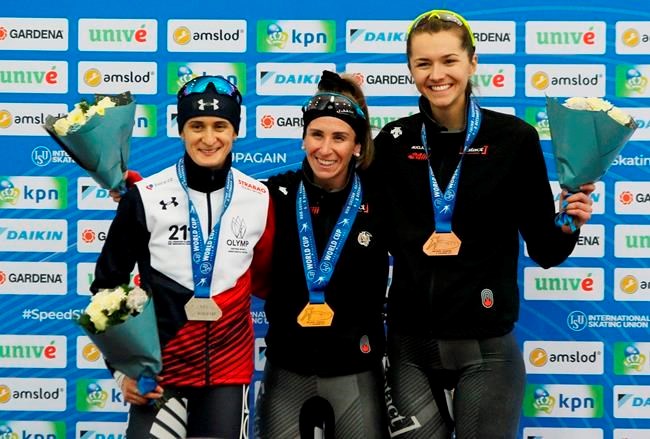 The Ottawa native earned an individual victory in the 1,500 metres and a group win alongside Isabelle Weidemann and Valerie Maltais in the team pursuit.

Blondin's time of one minute 55.599 seconds in the 1,500 set a new track record for the Alau Ice Palace, breaking a mark set by fellow Canadian Christine Nesbitt in 2011.

Irene Wust of the Netherlands took silver while reigning World and Olympic Champion Brittany Bowe of the U.S. was third.

Later Saturday, Blondin teamed up with fellow Ottawa native Weidemann and Maltais of Saguenay, Que., to capture gold in the team pursuit in 3:00.246, a tenth of a second faster than the Netherlands. Russia was third.

"It's been a pretty phenomenal weekend. I couldn't be happier," Blondin said. "I knew that we would achieve the first step of the podium in team pursuit this year, but the gold medal was a perfect way to cap off this weekend. I'm already excited for next week's races."

It's the first gold medal in the team pursuit for the Canadian women since 2012 and the first time Maltais has stood atop the podium since making the switch to long-track speedskating last season.

"Our secret for performing well in the team pursuit is that we train together every day and are very accustomed to skating together, so everything comes a bit naturally," Maltais said. "I have felt really good all weekend and all three of us had a lot of success in our individual distances, so we were able to bring that positive energy into our race today."

Ted-Jan Bloemen of Calgary, Jordan Belchos of Toronto and Tyson Langelaar of Winnipeg finished 3:47.650 for silver in the men's team pursuit.

This report by The Canadian Press was first published Dec. 8, 2019.

Bou scores twice, New England reaches MLS Eastern finals
Nov 29, 2020 7:47 PM
QMJHL Roundup: Lessard scores twice as Val d'Or beats Rimouski 5-1
Nov 29, 2020 7:26 PM
Jaguars fire general manager Dave Caldwell following 10th straight loss
Nov 29, 2020 6:02 PM
Comments
We welcome your feedback and encourage you to share your thoughts. We ask that you be respectful of others and their points of view, refrain from personal attacks and stay on topic. To learn about our commenting policies and how we moderate, please read our Community Guidelines.