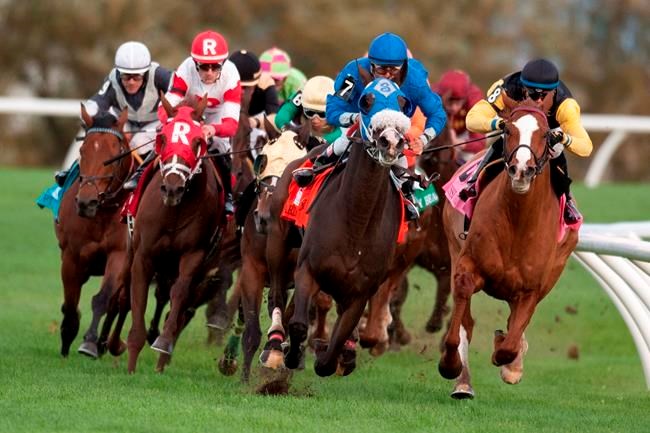 TORONTO — It was nowhere on trainer Tim Glyshaw's radar but jockey Eurico Rosa da Silva sensed something big was coming.

Da Silva rode Bullards Alley, a 42/1 longshot, to a stunning 10 3/4-length win in the $800,000 Pattison Canadian International at Woodbine Racetrack on Sunday. Da Silva, Woodbine's leading rider, moved Bullards Alley from third to the lead on the final turn and from that point on it was just a matter of just how far ahead of the field he'd finish for his first win in 10 starts this season.

"When I turned for home and asked him, he took off. From there, I knew it was over."

Bullards Alley, bred in Kentucky by Ottawa Senators owner Eugene Melnyk, became the first non-European horse to win this race in seven years. Oscar Nominated, another American bred, was a distant second in the 10-horse field ahead of French-bred Flamboyant.

Irish-bred Idaho, the 2/1 favourite, was fourth. The remainder of the field, in order of finish, was: Erupt; Chemical Charge; Enterprising; Postulation; Messi; and Johnny Bear.

When asked what was next for Bullards Alley, Glyshaw answered honestly he hadn't thought that far ahead.

"I'll have to go to my national stakes book and see what's available."

It was da Silva's first career mount aboard Bullards Alley. But da Silva sensed before the race he was in for quite a ride aboard the five-year-old gelding.

"I told myself the turf would be very very soft and I saw he can handle the soft turf so I had a lot of faith in him," Da Silva said. "I got more faith when I got on him.

"I asked (Glyshaw) if I could warm him up on my own and usually they say no but I wanted to get a feel for the horse. And he (Bullards Alley) gave me the best feeling ever . . . you don't know if they're going to win but you know they're going to run big."

Bullards Alley won the 1 1/2-mile race on a soft turf in 2:34.37 despite running into a brisk 48 kilometre-an-hour head wind on the final stretch. Glyshaw felt the slower pace helped his horse secure the $480,000 winner's share.

"He has a problem sometimes of getting disengaged in the race," he said. "The jock has to tap him on the shoulder or ride him a little bit to keep him within striking distance.

"When the pace is slower like it was today, he's already there. I think that benefited him."

Da Silva said when Bullards Alley broke, he felt his main job was to keep the horse focused on the job at hand and not become distracted by the wind. But Glyshaw said that wasn't really necessary.

"Bullard is a great horse and I love him to death," Glyshaw said. "But he's not the smartest horse in the world so he'd have no problem with that, he's not even going to know what it is.

"Some of those smarter horses in the race might be like, 'What's this? What's all this hitting me in the face.' "

Bullards Alley came into the race having won just $68,600 on the season and US$456,981 over his previous 34 career starts. The victory was the sixth of Bullards Alley's career and Glyshaw gave da Silva full credit for the dominant trip.

"We tried a couple of people in New York (to ride Bullards Alley) and couldn't be happier they had mounts because Eurico is the leading rider here and that says everything," Glyshaw said. "He knows the turf course better than anybody who rode it today and he showed it."

But da Silva said he didn't have a home-track advantage.

"These guys know what they're doing here, I was on the best horse that's the true story," he said. "Inside the gate in my mind I was thanking the universe to be here.

"I looked around me and saw these great riders and in my heart I was just happy to be there. My horse was giving me a great feel and I said I was going to have a lot of fun."

Queen's Plate winner Holy Helena was second behind Tiz A Slam in the Grade III $125,000 Ontario Derby over 1 1/8 miles. On July 2, Tiz a Slam finished behind Holy Helena in the $1-million Plate, denying trainer Roger Attfield a record ninth win.

And Field of Courage, a 40/1 longshot, won the Grade 2 Nearctic Stakes.