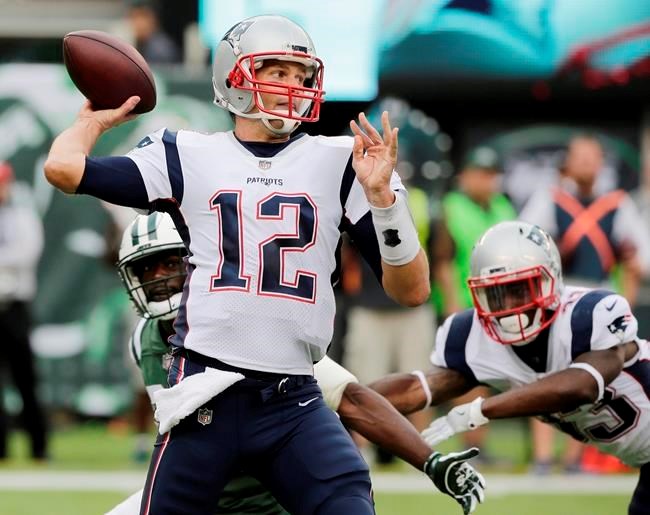 Brady, who broke a tie with Peyton Manning and Brett Favre, had to rally the New England Patriots from a two-touchdown deficit in the first half before holding on for a 24-17 win over the New York Jets on Sunday to claim first place in the AFC East.

"I wish we had done better, but we won," said Brady, who was limited early in the week with a sore left shoulder. "Probably a lot to learn from it. I wish we could have played better offensively. We got down early and came back. A good series before the half. We hung in there at the end."

The Patriots (4-2) were playing their first game in 10 days after beating Tampa Bay 19-14 on Oct. 5, and appeared a bit rusty early as they fell behind 14-0 in the second quarter against the surprising Jets (3-3).

New York had a chance to tie the game after getting the ball back with 1:53 remaining, but the Patriots' 32nd-ranked overall held on — forcing Josh McCown to throw incomplete on a desperation heave on fourth-and-16 from the Patriots 49, and ending the Jets' three-game winning streak.

"The mood in this locker room," running back Matt Forte said, "is we gave the game away."

Brady, who already had the NFL mark for total victories, was visibly frustrated early, but got going in this one just before halftime as the Patriots tied it at 14 with 9 seconds left in the second quarter on a 2-yard TD catch by Rob Gronkowski .

Brady then marched the Patriots down the field on their opening drive of the second half, going eight plays and 75 yards to give New England its first lead at 21-14 with a 33-yard pass to Gronkowski .

Brady finished 20 of 38 for 257 yards with two touchdowns to Gronkowski and an interception. Dion Lewis also had a 1-yard TD run.

"Every time he gets mad, you know he's in the game," said Gronkowski, who missed the last game with a thigh injury. "It gets you fired up. Sometimes you get scared you got him fired up."

After Stephen Gostkowski's 28-yard field goal made it 24-14 50 seconds into the fourth quarter, New York appeared to make it a one-score game again on its next possession as Austin Seferian-Jenkins took a short pass from McCown and reached over the goal line for a 4-yard touchdown .

But officials reviewed the score and said the video replay showed that Seferian-Jenkins slightly lost control of the ball when Malcolm Butler nudged it loose as the tight end was crossing the plane of the goal line. Seferian-Jenkins didn't regain control until after he had stepped out of bounds, resulting in a touchback — despite the ball never hitting the ground. That gave the Patriots back the ball, with the Jets' sideline irate.

"I feel like I scored," Seferian-Jenkins said. "But at the end of the day, that's what the refs called. I'm going to go with what the refs said. But I've got to have better ball security."

Jets wide receiver Jermaine Kearse was less diplomatic: "I'm pretty sure everybody's going to look back and say that was a B.S. call."

Added McCourty: "We felt the ball was juggled a little bit, but I didn't know which way it was going to go. As a , we'll take it any day."

But after the Patriots went three-and-out, the Jets were able to cut it to a one-score game on Chandler Catanzaro's 28-yard field goal with 3:40 left. But their last-minute comeback attempt fell short.

The Jets talked all week about starting faster and McCown got things going right away in this one, capping a 13-play, 88-yard opening drive with a 1-yard TD pass to Seferian-Jenkins. They converted three third-down situations on the drive.

The Patriots' second possession ended on a fumble by Mike Gillislee, and New York turned that into another score. McCown floated a pass over the outstretched arms of Butler and right to Jeremy Kerley, who leaped over the cornerback to snatch the ball and then skipped into the end zone untouched to make it 14-0.

It marked the first time New England trailed by 14 or more in the first half since Week 4 of the 2014 season at Kansas City.

Gostkowski was wide right on a 47-yard attempt in the second quarter — his first miss after making 12 straight. ... McCown finished 31 of 47 for 354 yards with two touchdowns and two interceptions. ... Seferian-Jenkins had a career-high eight catches for 46 yards.

The Patriots have won six of the last seven meetings with the Jets and 11 of the last 13. They have also won 11 straight road games, the second-best streak in team history since they won 12 in a row from 2006-08.

Patriots: home vs. Atlanta in a rematch of last season's Super Bowl.

Jets: at Miami next Sunday.