Campbell says residents are worried about traffic on the back road
May 27, 2020 12:30 PM By: Maija Hoggett 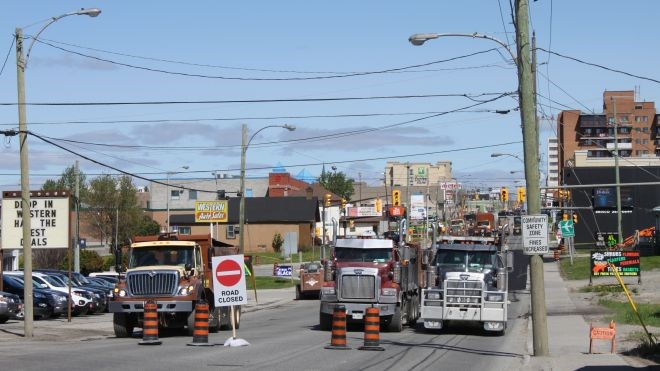 A file photo of Algonquin Boulevard in Timmins.

At the end of the May 26 meeting, a couple of councillors talked about the impact trucks are having on the Connecting Link, as well as side roads.

Coun. John Curley was disappointed to hear that the city isn't getting Connecting Link funding this year and proposed two measures to help save the main road through town.

In Timmins, the Connecting Link is a 21.35-kilometre stretch of Highway 101 running from Kamiskotia Road in the west to the old railway tracks in Porcupine.

Since 2016 more than $19 million of roadwork has been done on about five kilometres from the top of Rae Hill to Legion Drive.

Planned work on the Connecting Link in Timmins isn't moving ahead this year after the sole bid for roadwork on Algonquin Boulevard between Mattagami Boulevard South just east of the bridge to Theriault Boulevard came in millions over budget. The city engineer's estimate for the project was $6.1 million, and the sole bid came in at $8.5 million.

When the provincial funding announcement was made earlier this year, Matheson and Kapuskasing were earmarked for funding but Timmins was not on the list.

Curley has asked for staff to look at imposing half load restrictions for trucks going through Timmins, as well as limiting them to only driving in the curbside lane.

“The curb lane is in terrible shape now and I’m finding more and more of the truckers are using the centre lane and that is getting destroyed on top of this,” he said.

His suggestion for trucks in the right lane is for the stretch of road from the tracks in Porcupine to Canadian Tire.

“We have logging trucks, we’ve got mining truck all going through the community and we’re just beating ourselves up here and then trying to come up with some dollars to fix it. When the province is not coming on board for us then we have to take action,” he said.

Coun. Joe Campbell concerns are for heavy trucks heading to the Connecting Link from the back road.

He said he's received 19 emails from people living on Gold Mine Road.

“And they’re concerned with the pit east of Shaw Creek where transport trucks are pulling up there and heading Gold Mine Road and Moneta Avenue to access wherever they’re going,” he said.

Along with the wear and tear on the roads, there are safety concerns for kids riding their bikes in the area.

Campbell asked if it's feasible to have the trucks head eastbound to South Porcupine instead, which would mean they connect with Highway 101 at the Bruce Y.

Campbell emphasized the issue is not related to Newmont Porcupine's recent announcement about rehabilitation work at the Aunor A tailings facility northwest of Buffalo-Ankerite.

Those trucks will be using Gold Mine Road, Delnite Road, Railway Street and Pine Street South on weekdays, and Campbell noted they're local access.

Timmins Mayor George Pirie noted this year, the culvert on the back road over the creek voing into McDonald Lake is being replaced and the city may be rerouting traffic there.

In another road-related item, Coun. Andrew Marks asked for staff to look into a temporary stop sign at Rae Street South and Commercial Avenue.

Administrative reports on the items are expected at an upcoming meeting.

Severe thunderstorm watch in effect
Jul 9, 2020 10:14 PM
Comments
We welcome your feedback and encourage you to share your thoughts. We ask that you be respectful of others and their points of view, refrain from personal attacks and stay on topic. To learn about our commenting policies and how we moderate, please read our Community Guidelines.