The Transportation Safety Board has finished its investigation into the March crash
0
Aug 22, 2019 4:56 PM By: Maija Hoggett 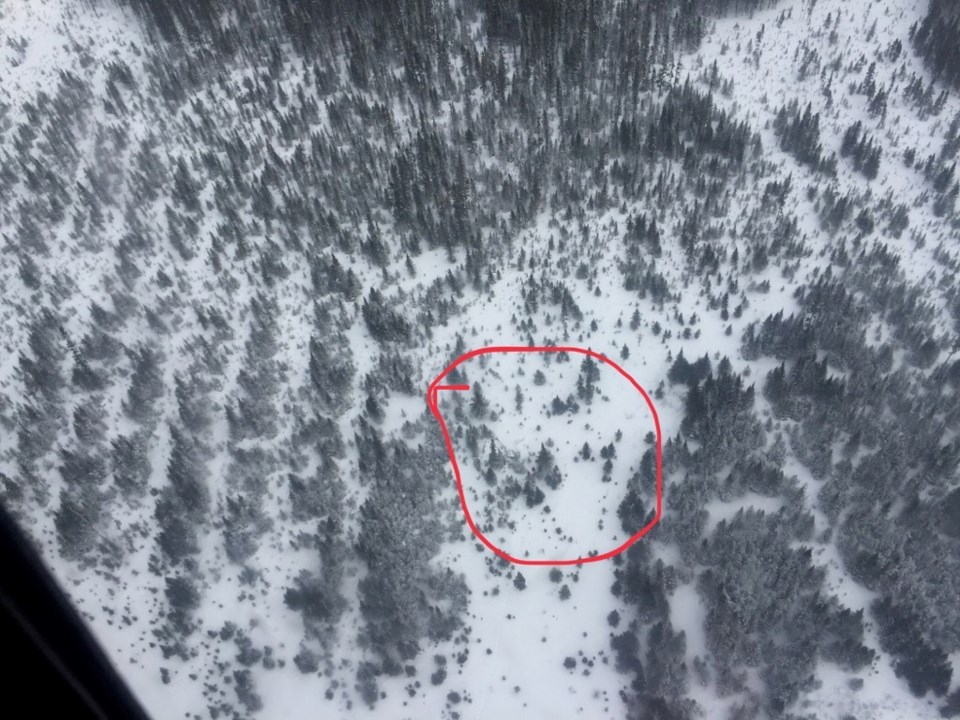 Crews in a Canadian Armed Forces Hercules aircraft spotted the site of a helicopter crash, circled in red, March 11, 2019. It was found 35 nautical miles from Nicole and Jody Blais' destination, a hangar in Fauquier. Supplied photo

The Transportation Safety Board of Canada has released its report on a fatal helicopter crash near Timmins over the winter.

Kapuskasing's Nicole and Jody Blais were killed in the crash. The couple was last seen Monday, March 4, 2019, leaving Sudbury in a Robinson R66 helicopter. They never made it to their destination, a hangar in Fauquier.

The helicopter was found in a wooded area, partially buried in snow March 11.

The TSB investigation had a limited scope and was to gather facts to "advance transportation safety through greater awareness of potential safety issues."

According to the TSB report, the wreckage was found 36 nautical miles south-southeast of the private helipad it was supposed to land at.

Because the pilot did not file a flight plan or flight itinerary, the helicopter wasn't reported overdue until the morning of March 6.

For the search, aircraft from the Royal Canadian Air Force, Canadian Coast Guard, and Civil Air Search and Rescue Association set up a headquarters at the Timmins airport. Family and friends also organized search parties on the ground.

The wreckage was spotted from the air in a previously logged area of forest with deep snow coverage, said the report.

"Both occupants had been fatally injured. The helicopter was destroyed. There was no post-impact fire, and the emergency locator transmitter (ELT) did not activate," reads the report.

The TSB says nearby tree damage and the damage to the helicopter indicates the "aircraft was in a steep nose-down, left-bank attitide when it struck the ground".

"The helicopter then pitched over and came to rest on its back. The tail boom had snapped at approximately the midpoint, and there was minor damage to the tail rotor. The main rotor blades were mostly buried in the snow, but showed significant damage when uncovered. All portions of the main rotor blades were still attached to the mast, which was paritally separated from the helicopter. The gearbox and the engine (Rolls Royce RR-300) had broken free of their mounts. There was a strong odour of jet fuel at the site."

According to the TSB, the occupants were ejected during the impact.

"There is no evidence that either occupant had been wearing a seatbelt at the time of the occurrence; however, given the damage to the helicopter, the accident was not survivable," stated the report.

During the impact, the mounting bracket for the ELT broke.

However, the report says the ELT was found turned off and didn't activate.

On the day of the crash, the pilot had flown about eight hours before the collision, with the flight to Fauquier being the fourth flight of the day.

The earlier flights were from Nashville, Tenn. to Springfield-Beckley, Ohio; Ohio to London, Ont; and London to Sudbury.

The helicopter left Sudbury at 6:42 p.m.

That day, the report notes twilight started shortly after and most of the flight was on night visual flight rules.

"Although the aircraft was equipped with a transponder, it was not recorded on radar after leaving the Sudbury area," reads the report.

According to the TSB, a pilot is required to complete five night takeoffs and five night landings in the previous six months in order to fly with passengers at night.

"The pilot had not conducted any night takeoffs or night landings in the six months before the occurrence flight and therefore did not meet the currency requirements to fly at night with a passenger on board," states the report.

The pilot had purchased the helicopter involved in January 2016.

The report says it was equipped with basic flight instruments, engine instrumentation and an annunciator panel to display warning lights for abnormal conditions.

"The helicopter was not certified to fly under instrument flight rules (IFR) and was not equipped with an autopilot. A portable GPS (global positioning system) was mounted beside the instrument cluster and found at the accident site," reads the report.

"There were no pre-impact mechanical failures or system malfunctions identified that would have contributed to this accident.

"The investigation determined that the engine was developing power and the rotor RPM was in the normal operating range at the time of the collision with the terrain."

The TSB also draws attention to the Robinson R66 Pilot's Operating Handbook and what it says about night visual flight rules and what happens when an outside visual reference is lost in its investigation summary.

"[the pilot] loses [...] his ability to control the attitude of the helicoper. As helicopters are not inherently stable and have very high roll rates, the aircraft will quickly go out of control, resulting in a high velocity crash which is usually fatal."

The handbook also warns agains flying at night unless there is clear weather with unlimited or very high ceilings, and celestial and ground lights.

According to the TSB, the weather in the area that day had broken ceilings at 4,000 above sea level and areas of reduced visibilities. The weather radar near Smooth Rock Falls, didn't show significant snowfall during the flight.

You can read the full report here.

Two new COVID-19 cases confirmed in the area
Mar 30, 2020 7:53 PM
Comments
We welcome your feedback and encourage you to share your thoughts on this story. We ask that you be respectful of others and their points of view, refrain from personal attacks and stay on topic. To learn about our commenting policies and how we moderate, please read our Community Guidelines.