Local music fans who prefer their tunes played on a turntable once again have a retail option.

Hometown Records is now open in South Porcupine. It is an independent partnership between Skoser Merch and Custom Printing owner Paul Mascaro, and Michael Lascelle.

Lascelle, who was an assistant manager at Sunrise Records in the Timmins Square before it announced it would be closing, took quick action to ensure vinyl didn't die locally.

"I was there for about two years. The last two weeks, they made me manager, and then just kind of told us we were closing down. Then we spent about a month from that point just kind of closing up and emptying the store," he said.

"Once it was closed, I came here, talked to Paul and came up with the idea to open a record store here, and pick up where they left off."

The Sunrise Records chain recently announced they would be taking over 70 former 'HMV' locations in malls and storefronts across Canada. The Timmins location was not among the initial wave of locations confirmed by the chain on Thursday, nor is it expected to be among those announced in the coming weeks. Lascelle said there was a fairly obvious factor in its demise at the Timmins Square.

"It was more or less just the fact that the location itself was extremely expensive. With the rent and everything, it was nearly impossible to keep up."

Hometown Records is a combination of new and used vinyl. Locals who might be looking to unload some inventory are in luck.

"A lot of the used stuff was some leftovers from Sunrise Records, some old stuff I had in my collection, some stuff that Paul had in his. We're also looking to pick up some used records as well. If anyone has records to sell, we're looking."

For those who prefer a brand spanking new copy of a recent release, custom orders are available if the store doesn't have it on hand.

"We're set up with a distribution company outside of Toronto to bring in the new stuff, and they have probably the largest selection in Canada, plus we're looking at other distribution labels as well, to pick up the stuff they don't have. Basically getting our hands on whatever we can. and satisfy as many people as possible," said Lascelle, adding that he is always open to suggestions.

Despite not being a huge location, the space is well used, and has albums from nearly every genre imaginable.

"We've kind of carry everything. For instance, right now I'm looking at the 'Sex Pistols', we also have the 'Zac Brown Band', we have 'Pavement', we have 'The Arcs', we've got 'Syd Barrett'. We've got some heavier stuff like 'Obey the Brave', and 'Deftones'. We've got classic stuff like 'C.C.R'., 'The Rolling Stones', 'Against Me', trying to cover everything we can," said Lascelle.

Also available is a solid selection of 45s, or 7" records, particularly punk rock, with some newer releases mixed in.

"It's actually really hard to find 45s of the more classic bands nowadays. Because they're not really releasing them anymore, and there's a lot of 45s that don't get re-pressed, that's why its nice to have the used ones."

Lascelle became enamoured with records through his father. 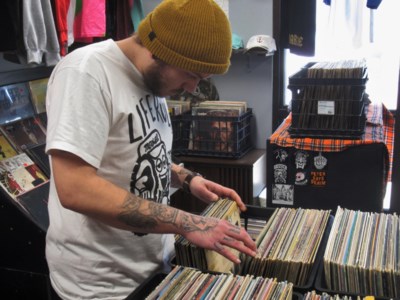 Hometown Records proprietor Michael Lascelle believes there are several factors behind the resurgence of vinyl. Andrew Autio for TimminsToday

"When I was probably like six, my dad pulled out his record player and his collection, and set it up one night. We were all listening to stuff on it. It was a lot of fun. I have good memories of it. Then when I was 11, he kind of told me that if I wanted it, I could have it. So I got into vinyl then, and every time we went out of town, for any reason, I was just kind of drawn to record stores. I love the aesthetic of record stores. I love the feeling of just going through records. its nice, its calming. I started collecting as much as I possibly could, and then when we got the store in Timmins, all my paycheques went to records," he said with a laugh.

Vinyl has seen a resurgence in the last decade or so. The compact disc, which dominated music sales in the 1990's, has now become a fairly tough sell. Although online digital is the current king of music sales, more and more artists are insisting their albums are also released on vinyl.

So what is the cause of the new wave of album sales?

"Speaking to collectors over the last two years at Sunrise, I noticed a lot of them, they've been looking out of town, so it never really died out for them. The younger generation, I noticed is really getting into it because the older generation has shown them, and they appreciate the sound of it, or its kind of like, and I hate using the word, its almost like 'hipster' thing. Anything nostalgic is a 'hipster' thing nowadays. So there's a lot of the younger generation out there collecting, just to collect it, but there is the appreciation of the music and the vinyl itself. There's a handful of reasons why its coming back, but I'm glad it is," said Lascelle.

For long term collecting, the vinyl record has also proven to be much more durable and able to stand the test of time compared to CDs, which can be ruined with one unfortunate scratch. Lascelle believes there is a little more interactiveness and intimacy with records.

"You pay more attention to an album when you're listening to it on vinyl. If you just toss in a CD, it becomes background noise, because you don't have to do anything to change it. With a record, there's work to put it on and halfway through, you have to flip it so then you notice it. You listen for it. There's more focus on the music," said Lascelle.

He said they are also looking into distributors for record players which could become part of Hometown Records in the future. He's looked at a few companies, but wants to keep it reasonable.

"We want to get good quality gear for our customers, but we just don't want them to pay and arm and a leg for it."

Hometown Records is open from 10 a.m. to 6 p.m. Monday through Wednesday, 12 to 8 p.m. on Thursday and Friday, and 12 to 5 p.m. on Saturday. It is located in the Skoser complex at 97 Bloor Avenue in South Porcupine, just off of Main Street.

Lascelle will also be set up with vinyl for sale during the second edition of 'Heart of Gold Fest' beginning on March 24.

So far, the response from local record enthusiasts has been huge, despite only being officially opened for a few days.

"Definitely. We've had all of our collectors, our big name collectors in town just kind of waiting to hear when we'd be opening. We got our first vinyl order in yesterday, and we've probably sold 70 per cent of it in the last 24 hours. Everyone seems to be really interested in what we're doing, so the more we bring in, the more action we get," he said.

INSIDE THE VILLAGE: Young lotto winner determined ‘to give back to community’
Feb 3, 2023 9:22 PM
Reader Feedback