Over 65? Want a free injection? 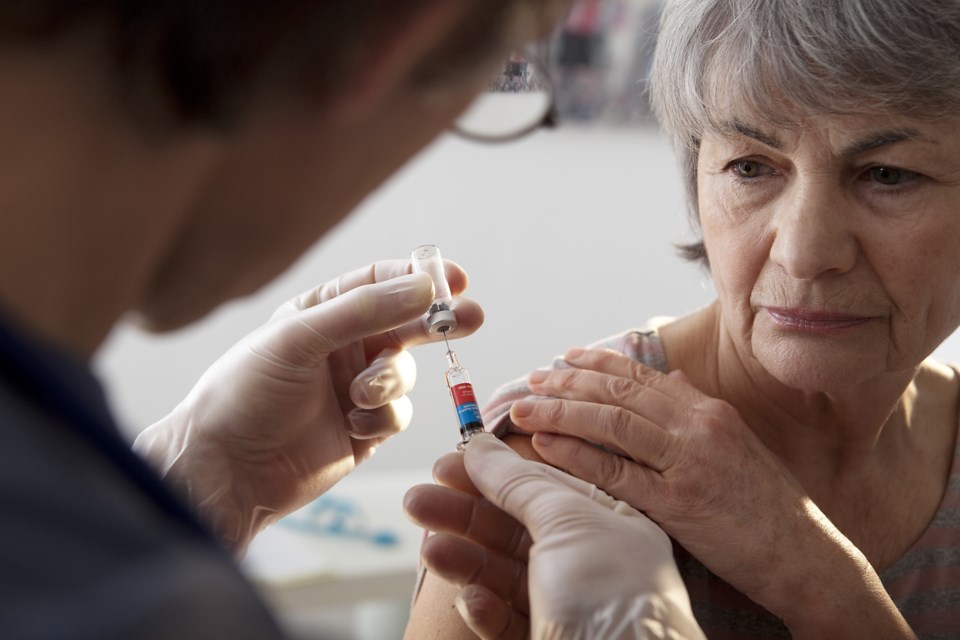 The Porcupine Health Unit has announced an immunization program to vaccinate seniors between the ages of 65 and 70, including those who were born in 1945 and turned 71 this year, against the herpes zoster virus commonly known as shingles.

“In the general population of Canada 30 percent of the population has the risk of acquiring the herpes zoster virus,” said Dr. Lianne Catton, Medical Officer of Health for the Porcupine Health Unit.

The vaccine is publicly funded for seniors between the ages of 65 and 70, including those who were born in 1945 and turned 71 this year.

“There are 130,000 new cases per year in Canada and seniors have a greater risk of suffering a complication arising from shingles that is known as post zoster neuralgia,” Dr. Catton explained.

“In some cases there is potential hospitalisation,” she added.

According to Immunize Canada, the Herpes zoster virus, also known as shingles, is a painful disease that results from the reactivation of the varicella-zoster virus (VZV), the same virus that causes chickenpox.

After varicella (chickenpox) infection, the virus lies dormant for many years and for unknown reasons will become active again and present itself in the form of shingles, an often debilitating and blistering rash that typically affects a side of the body or face. Some individuals may experience severe long-term pain after the shingles rash has disappeared, as well as other complications, including skin infections and scarring, which can interfere with normal day-to-day activities. In severe cases facial paralysis may also result.

According to the Canadian Pain Society, “about one in three older Canadians will develop the condition, and the effects can be devastating and long-lasting.”

“There are two phases with shingles,” explained Dr. Aline Boulanger of the Canadian Pain Society.

“There is the acute phase, where the virus comes back from a dorsal root ganglion close to the spine and back, through the nerves, and into the skin. This is extremely painful. After that comes the chronic phase where, for a portion of the population, the pain decreases or disappears, but for many the pain stays for a long time, sometimes their entire life.”

Approximately 90 per cent of Canadians have had chickenpox and are at risk of developing shingles.

Lynn Leggett, the Manager of Infectious Diseases and Clinical Services said her office has already sent notices to all the physicians in the Porcupine Health Unit about the availability of the vaccine and

“We are providing the vaccine to family doctors and physicians to administer to their patients from ages 65 to 70 and that includes those who were born in 1945 and already turned 71,” Leggett said.

People who have suffered chicken pox have the potential for acquiring shingles later in life and a lot of people don’t realize that Shingles is related to chicken pox virus.

For those who don’t have a family doctor they can call the Porcupine health unit and book an appointment to get vaccinated for shingles.

“We recommend they speak with their physicians first but if for some reason they can’t the get it there or they don’t have a family doctor, they can come to the Public Health Unit for the vaccine,” said Leggett.

Leggett said the program will be permanent and ongoing.

Another vaccination program that is just around the corner is the annual flu shot that typically begins around mid-October.

“It’s very important to get a flu shot,” emphasized Dr. Catton, the Medical Officer of Health for the Porcupine Health Unit. “It is highly contagious and some people get very sick from the flu and are even hospitalized.”

It is also important to get immunized every year because each year a new strain of flu emerges and the previous vaccine may not offer protection.

The flu shots will also be offered at local pharmacies and the Porcupine Health Unit will coordinate the hours with the pharmacies to make sure they provide maximum coverage without duplicating the hours they provide the service.

Local man facing additional charges after recent arrest
Oct 30, 2020 12:41 PM
Comments
We welcome your feedback and encourage you to share your thoughts. We ask that you be respectful of others and their points of view, refrain from personal attacks and stay on topic. To learn about our commenting policies and how we moderate, please read our Community Guidelines.