Possible sighting in Kapuskasing on Wednesday, another a day earlier in Iron Bridge
0
Jul 31, 2019 2:55 PM By: Arron Pickard 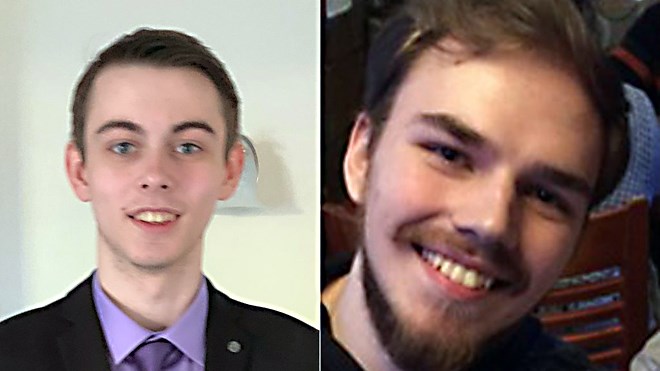 Bryer Schmegelsky, 18, and Kam McLeod, 19, are wanted for three murders in B.C. An extensive manhunt has been underway for them for more than a week. The suspects have not been since July 22 in Gillam, Manitoba. (Supplied)

The Ontario Provincial Police said officers are investigating a report of a suspicious vehicle after someone called in with concern to a vehicle being driven by “young males in their 20s,” said a spokesperson.

Acting Sgt. Shona Camirand, North East Region media co-ordinator, said the OPP cannot deny or confirm a connection to the murder suspects from B.C. No make or model of the vehicle was provided, nor was any description of the occupants, other than that they are young males, provided.

“Any claim as to who (was in this vehicle) is unsubstantiated at this time,” said Camirand. "At this time, we don't know where the vehicle is. Officers are taking statements and patrolling the area looking for this suspicious vehicle.”

She said the OPP is in contact with the RCMP, but “we've really got nothing to go on other than a report of a suspicious vehicle.”

The Ontario Provincial Police is investigating all leads into possible sightings of the two B.C. murder suspects currently at the centre of a massive manhunt.

Bryer Schmegelsky, 18, and Kam McLeod, 19, were last seen July 22 near Gillam, Man., but they weren't called suspects until July 23. The Manitoba search was extensive, involving both RCMP and Canadian military assets, but today the RCMP announced the search was at an end, having turned up nothing.

Const. Michelle Coulombe, media relations/community safety officer for the OPP, said there have been several reports of sightings of the suspects, the most recent one around Kapuskasing, northwest of Timmins.

A post on Facebook by a Dylan Boucher stated the suspects passed through Kapuskasing Wednesday morning and “pulled a gun on a construction worker” by Drisdale Variety Store.

Coulombe said the OPP is aware of the possible sighting, and while nothing has been confirmed, officers have been deployed to investigate. There has been no report made by anyone about a gun being pulled, either, she said.

The OPP received another report of a possible sighting on Tuesday near Iron Bridge, east of Sault Ste. Marie.

That being said, the OPP is encouraging the public to keep calling with possible sightings of the suspects. The OPP is in contact with the RCMP, and if a sighting is confirmed, then a call will be made to inform them, Coulombe said.

If you think you have spotted the suspects, don't approach them, Coulombe said. Call police, and try to provide as much detailed information as possible.

“We appreciate the calls, and want the public to continue to do so if they think someone matches the description of the suspects,” Coulombe said.

Manitoba RCMP said today they are winding down search efforts in northern Manitoba. After extensive aerial, water and ground searches using drones, planes, helicopters, boats, and dogs, no trace of the suspects was found, save the burnt-out vehicle the suspects abandoned.

Although announced as murder suspects on July 23, the Vancouver Island teens were first missing persons. On July 15, the bodies of U.S. resident Chynna Deese and Lucas Fowler of Australia were found shot and killed on the Alaska Highway in B.C., near Liard Hot Springs. On July 19, the body of Leonard Dyck, a botany lecturer at UBC, was found in a pullout on Highway 37.

Schmegelsky and McLeod were first considered missing persons after their vehicle was found burning near where Dyck's body was found.

They were announced as suspects — and a massive manhunt began — on July 23.

There's no easy way to cross from Gillam, Man., into Ontario. They would have had to travel south through Thompson to Winnipeg to reconnect with the TransCanada Highway.

About the Author: Arron Pickard