Comic book fans in Timmins can get their hands on the second edition of 'Auric of The Great White North' beginning on Saturday.

"The book actually launched last weekend at Fan Expo in Toronto, which was the first time people could get it, but locally it will be the first time. Because its sold at Jump City, we wanted to have a little event to launch it locally," said Brendan Montgomery of the Kablam Comic Book Club.

Writer Davis Dewsbury will be on hand to meet and greet with the public, and sign a copy upon request.

The first edition was fuelled by a Kickstarter campaign, but sales and advertising have made the comic essentially self-sustainable, as long as the sales keep strong.

Dewsbury took a few minutes to speak with TimminsToday about his project.

Q - Where did the idea for Auric come from?

DD - For the past 4 years I've been head of organizing the artist alley with the Northern Ontario Expo, our local annual comic and geek culture show. One of our artist guests, Mike Rooth, designed a mascot for us a couple years back. It was a man with the head of a beast, similar to a lion, that was dressed in Celtic garb, drawing a bow and arrow. That year we also had a contest to find a cool name for the character and local artist and co-owner of Jump City Katherine Montigny won with the name 'Auric. '

In 2015, I was able to entice Andrew Thomas, my artist and partner on Auric, to join the Artist Alley of the 2015 N.O.E. It was Andrew's idea to do a short story using the show mascot so we did a mini-comic (about 10 pages) and printed up 200 copies. We sold the lion's share, no pun intended, by the end of the show and then sold out a few days after. It was after that, Andrew and I decided to start a continuing series with Auric.

Q - How would you describe the character?

DD - Auric is a 100+ year-old miner from Timmins who was, along with a big part of our population, exposed to a mysterious gas released from a mining incident. That mysterious gas changed the miners in the mine and many northerners, once it reached the outer atmosphere, into evil monsters. Only Auric, on the moment of his first transformation, was visited by a Northern Goddess who gave him the power to harness the new powers within him, and allow him to lead the fight in the upcoming battle the north was about to face against this new evil spread across the land.

Q - What is the process for creating a full-length comic? How often do you convene with the artists?

DD - The process of putting the comic together goes rather smoothly considering I write out of Timmins and Andrew draws out of Mississauga. Heck, our new colourist Sharon Gauthier works out of Gaspe, Quebec. But thanks to modern technology we get along quite well. We keep in contact and share our work digitally with the use of Facebook messenger, Dropbox and email.

I'll start off telling Andrew where I want to go with the story, then listen to any input he has. I think it's important that you ask your artist, what do you want to draw, then try to work that into your script. For example, right now I'm working on one of the scenes of Issue No. 3 and Andrew told me, he wants to draw a knockdown brawl between Auric and the bad guy. It's my job to help provide these requests to keep the art work enjoyable for him. 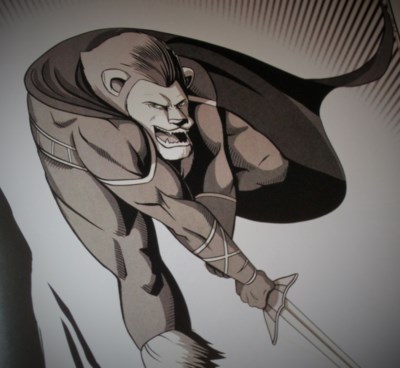 After we both know where the story's going, I get to storyboarding and scripting. Not every writer storyboards, but I find it gives me a quick visual for when I'm scripting out a page. Then my horribly drawn storyboards, did I mention that I can't draw a lick?, and my scripted pages go off to Andrew to panels and ink. After that, the completed ink pages go off to Sharon to colour, then back to Andrew to text. It's a pretty long process considering we all hold down jobs.

Q - Are comic books and graphic novels on a popularity surge in recent years?

DD - Comics are a legitimate art form. It seems these days with Hollywood finally tapping into decades of great stories, comics are getting the respect and legitimacy they deserve, and not just in the States. Canada has a huge history in comic books and it seems that's going through a renaissance now too. It just seems like the right time for a hero to step forward and represent Northern Ontario and especially Timmins.

The second edition of Auric can be purchased for just $3.