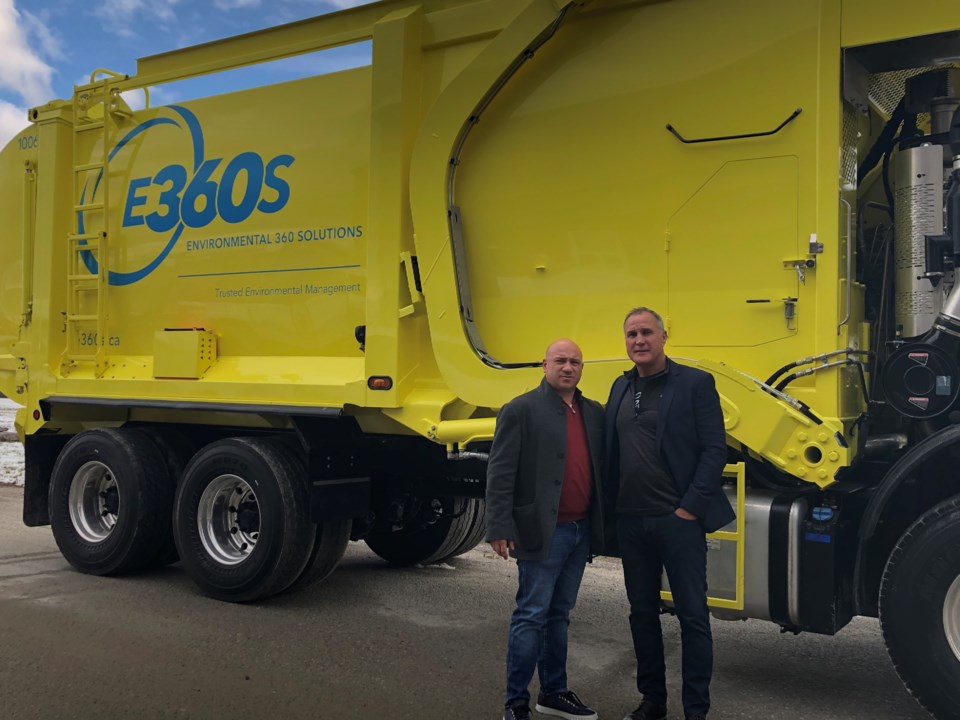 Environmental 360 Solutions' Danny Ardellini and Paul Coffey with one of the new trucks hitting the streets in Timmins. Alain Quevillon/RogersMedia

A Timmins business has been acquired by Environmental 360 Solutions.

Founder and CEO Danny Ardellini and four-time Stanley Cup champion Paul Coffey, one of the original investors, were in town to announce the news this week.

Environmental 360 Solutions is a full environmental company that deals with solid and liquid waste and recycling for residential and commercial clients, Ardellini explained to RogersMedia.

Ardellini said NISG is their sixth acquisition, and a seventh is on the way.

They are now located from Cornwall in eastern Ontario to Kelowna, British Columbia.

“Next year we should be on a growth pattern of doing anywhere between 14 and 17 acquisitions. It has gone faster than we thought,” he said.

The deals, he said, are all over Canada, and exclude major metropolitan cities.

In Timmins, people can expect to see the new Environmental 360 trucks and dumpsters around town.

Ardellini said it will take about six months to rebrand the whole company.

This isn't the first time Ardellini and Coffey have worked together.

Coffey said years ago, they started a marketing company together. What he knew Ardellini is good at, though, is waste management.

“I’ve been lucky through my whole career to surround myself with real good people, whether it be Gretzky, whether it be Lemieux, whether it be Steve Yzerman, guys like that - great players. And Danny fits that bill times 10,” said Coffey.

“Anytime you can surround yourself with somebody that’s real good at what they do, it’s a no-brainer."