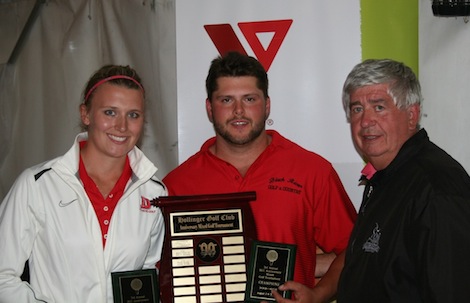 The 3rd Annual  HGC Anniversary Mixed Golf Tournament was played this past weekend at the Hollinger Golf Club.

The two-day event was a fundraiser for the Timmins YMCA Strong Kids program, which once again raised $11,000.

"This is one of the premier events of the Hollinger Golf  Club season,” said Club GM Jeff Boismier.

"We couldn't be happier that this event was sold out (72 teams). Our golf course staff put their best foot forward in support of this great local cause,” added Boismier.

"The support from the business community and individuals was nothing short of fantastic. We were ready and  Mother Nature cooperated with two great days of sunshine and a bit of rain,” stated Archer.

The weekend included two 18-hole rounds of golf, a dinner and breakfast, over $4,000 in prizes, hole-in-one and putting contests, and draws for over 80 donated prizes.

This year's champions were the team of Shelby Madden and Philippe Losier from the Hollinger Golf Club with an unbelievable 20 under par score of 122 (62-60) for the two-day event.

Being at service to others important for high school principal
Sep 19, 2020 1:00 PM
Comments
We welcome your feedback and encourage you to share your thoughts. We ask that you be respectful of others and their points of view, refrain from personal attacks and stay on topic. To learn about our commenting policies and how we moderate, please read our Community Guidelines.