In the name of science

Science Timmins will get their wish to have an official name attached to a laneway behind city hall.

Antoine Garwah, President and CEO of Science Timmins, wrote a letter to the city, which was briefly discussed at Monday's council meeting.

The lane runs between Pine and Cedar and will be called "Science Village Lane."

"I don't believe there is a name on the laneway yet, so its a very easy thing to accommodate to support Science Timmins and all the work they've done establishing Science Village" said Mayor Steve Black.

Science Village opened its doors in 2014, nestled at the back of the building that is now St. Mary's Gardens. The main entrance is off of the laneway.

"This will make identifying our location easier all the while helping with the branding of our new venue" said Garwah in the letter. 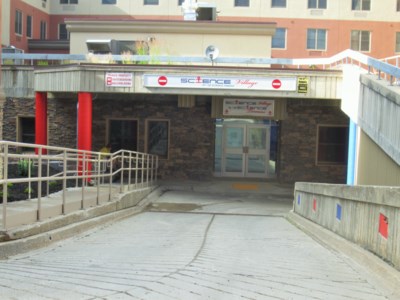 The front entrance to Science Village. Andrew Autio for TimminsToday

The official council vote will take place at a meeting in the near future, although it would seem to be a mere formality.

"It's a great idea, and now that the laneway is freshly paved, its beautiful actually and I think I'd be very proud to have a name on it" said Councillor Pat Bamford.

A revolutionary way to stop snoring is now available in Timmins

Add hiking and biking in Timmins to your summer fun list