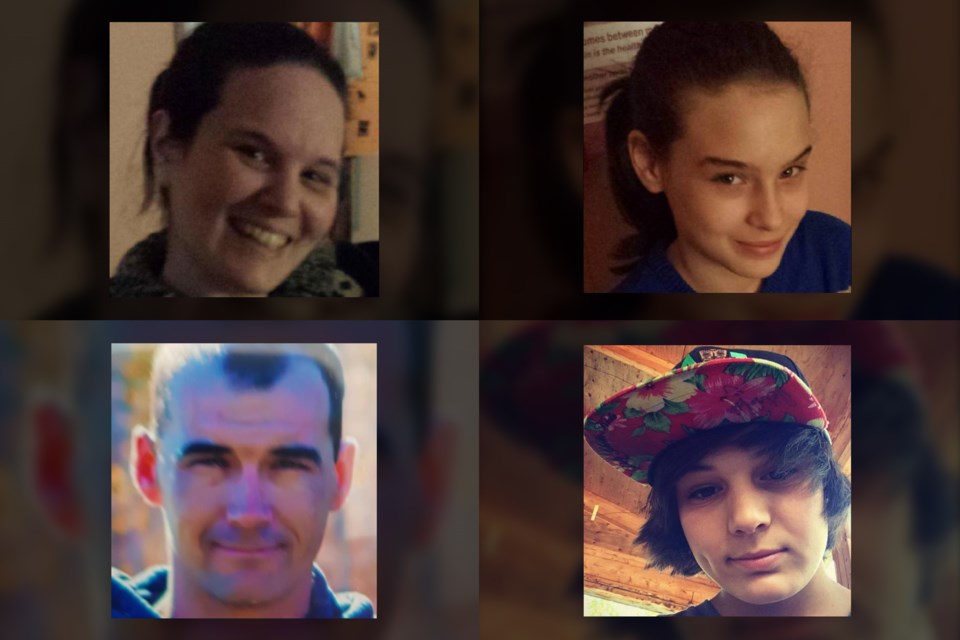 Police are asking for informaiton bout Joey Gagnon, 37, Tammy Gagnon (Robitaille), 34, Cole Gagnon, 16, and Brandi Gagnon, 14 after the discovery of four bodies and a burned out car on a rural Timmins road. Photos supplied by police

A GoFundMe page to help cover the cost of funeral and memorial arrangements for the Gagnon and Robitaille family has been set up.

Yesterday, Timmins Police appealed to the public for information about four residents in connection to its investigation into a suspicious car fire, where four bodies were found at the scene. The people they are looking for information on leading up to Friday, April 20 are: Joey Gagnon, 37, Tammy Gagnon (Robitaille), 34, Cole Gagnon, 16, and Brandi Gagnon, 14.

While police can’t confirm the identities of the people found at the scene until post-mortem examinations are completed in Toronto, a GoFundMe campaign has been set up to “help with the unexpected financial cost of funeral and memorial arrangements."

“With recent tragedy we have lost beloved members of our family,” reads the description on the page. “Joey, Tammy, Cole and Brandi were part of a large loving family, they will be greatly missed by their parents, siblings, nieces and nephews, grandparents and extended family. They were the faces we seen at family gatherings, holidays, BBQs and traditional Sunday suppers.”

The goal for the campaign is to raise $50,000 for Joey and Tammy's parents.

You can contribute to the campaign here.

Police ask for information on mother, father, two teenaged children as investigation into grisly discovery continues (update)
Apr 23, 2018 1:26 PM
Comments
We welcome your feedback and encourage you to share your thoughts. We ask that you be respectful of others and their points of view, refrain from personal attacks and stay on topic. To learn about our commenting policies and how we moderate, please read our Community Guidelines.