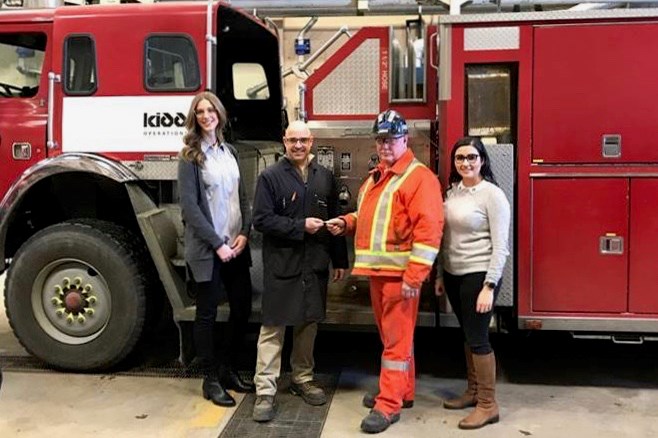 NEWS RELEASE
GLENCORE KIDD OPERATIONS
*************************
Glencore Kidd Operations replaces their fire truck and donates their previous unit to Collège Boréal. The students enrolled at Collège Boréal’s Truck & Coach Technician and Apprentice programs at the Timmins Campus will now be able to practice an assortment of repair and maintenance techniques for working on fire trucks.

Michelle Boileau, Postsecondary Programs Manager at Collège Boréal mentioned that the Kidd Operations’ donation of their fire truck will benefit the campus by “allowing students to perform diagnostic testing on the systems and components and to learn how to disassemble and reassemble the different parts. It will also provide variety in the kind of trucks they work with, allowing for comparative studies between transport trucks and fire trucks.”

In addition, Glencore Kidd Operations contributes a financial cash donation annually to La Fondation Boréal for the distribution of bursary awards to graduating Trades and Applied Technology students to celebrate their academic success and promote our local operations as an excellent place to work. Glencore Kidd Operations has donated over $11,000 in bursary awards over the past eight years.

BEYOND LOCAL: Designing artificial brains can help us learn more about real ones
Feb 23, 2020 9:25 AM
Comments
We welcome your feedback and encourage you to share your thoughts on this story. We ask that you be respectful of others and their points of view, refrain from personal attacks and stay on topic. To learn about our commenting policies and how we moderate, please read our Community Guidelines.