Timmins' own craft brewery, Full Beard Brewing, celebrated a milestone on Tuesday, as the 100th batch of beer made in 2017 made its way into the tanks.

"Basically we called it '100 grey whiskers' as a joke, because it has given us a lot of white hair from doing a lot of brewing, learning, and understanding," explained owner and founder Jonathan St. Pierre.

"The beer has to go somewhere, and obviously the city of Timmins is consuming it, so it's been good," he said.

"It's given us some extra momentum."

For a young pup on the craft brewing scene, the 100th brew of the year is quite an accomplishment.

"It's huge. To do a hundred in the first seven months, that's a lot. It's more than I forecasted when we first looked at trying to do some brews. We've really surpassed a lot of the expectations. We've got ten employees now, part-times to full-times, but we're making work for people out there who, maybe worked other jobs and maybe didn't like it and wanted to do something different. They can always move up. There's always new things to learn, from kegging to canning to doing events. It feels really good to be able to reach this milestone," said St. Pierre.

St. Pierre says Full Beard is now on tap at more than ten establishments around the city, including some popular chain restaurants, which has been great for local exposure. Looking beyond the city limits, St. Pierre and his team just returned from the popular Smooth Rock Falls Truck Fest, and from the drag races in Wawa the previous weekend, both of which were big successes in terms of expanding the potential customer base.

"People are getting used to it. Not everybody's going to be a fan right off the hop, but they're trying it. They're willing to diversify their tastebuds," he said.

Full Beard is also available at four establishments in Sudbury, one in Espanola, and likely soon at a few in North Bay. They have also been asked to attend several other events around the province, as far away as Pembroke.

It was about three years ago when St. Pierre developed the idea to brew in Timmins. 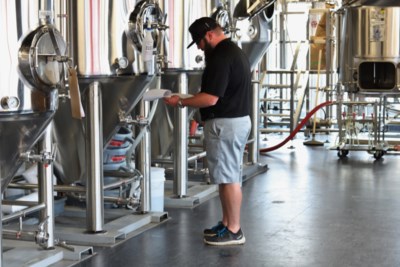 St. Pierre is more than happy with the progress of the brewery in its first full year of operation. Andrew Autio for TimminsToday

"Over that course of time it was a lot of visiting places, talking to different people, making friends with new and craft breweries in the region and down south. It got me going. I worked at The Beer Store for 15 years, and started selling craft beers and tasting them. It's a totally different taste. You're getting good quality beers and you know what you're getting in it. The 'big guys' out there, they have some nice beers that they do make, but I find its just 'plain Jane' across the board, whereas you're getting diversity with us, and craft brewers in general," he said.

Another major development occurring recently for Full Beard is the release of 473 milileter cans, also known as tallboys.

The 'Bearded Prospector' cream ale, 'Aussie, Aussie, Aussie, Eh, Eh, Eh' Australian Ale, and the '5 O'clock Shadow' pale ale can be purchased in house in addition to the loveable jugs known as growlers. St. Pierre is hoping to eventually see Full Beard sitting on shelves across the province, but isn't rushing anything.

"It is in our minds. We're taking baby steps first. We just started getting the cans for the consumers now. I think we're going to see where our trends will be. Will we sell less growlers? More cans? Or an even split? We're going to test out the market before we jump into it. We've already had talks with the LCBO and The Beer Store, but it probably won't be here, in town, but more throughout the region like Kirkland Lake and New Liskeard. Perhaps in agency stores as well, in camping and cottage areas, they can facilitate and have our beers there. But really, I'd like to have people come to our store and buy locally here, it's better for us," he said.

The cans cannot be consumed in the tap room, as regulations state that beer can only be served in 12-ounce glasses on site, but the empties can be returned to The Beer store.

The brewery recently added an additional tank, and is kicking production into top gear after a busy summer flurry.

"We need to brew more. After Stars and Thunder, and Rock on the River, Wawa, and Smooth Rock, I depleted my inventory of beers. We're just playing catchup," said St. Pierre.

A revolutionary way to stop snoring is now available in Timmins