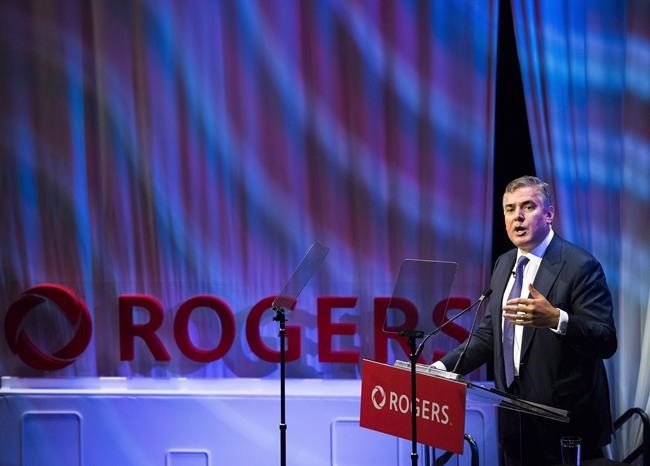 GATINEAU, Que. — Rogers chief executive Joe Natale and his team of executives made several attempts Wednesday to dispel a widely held view that this country's wireless services are overly high by world standards.

"If pricing is a central issue, then surely we must consider up-to-date data and rely on sound methodology. Some presenters have relied on dated price comparisons," Natale said at a regulatory hearing in Gatineau, Que.

He said the Infinite data plans introduced last June for the Rogers Wireless brand had lowered the price of 10 gigabits per month to $75 per month from $100 per month, and eliminated additional overage fees.

Natale said that a comparable Verizon plan in the United States costs slightly more than $90 in Canadian currency.

He was the latest high-ranking representative of Canada's wireless companies to appear before the Canadian Radio-television and Telecommunications Commission, which is considering a new policy to stimulate lower prices.

Natale said his company provides a range of prices through flanker brands — Fido and Chatr — that target other market segments with different lineups of service plans and devices.

For example, Natale said, the premium Rogers brand provides "high touch" customer service, a person to answer the phone and be there for every interaction, as well as the possibility of sharing data through family plans.

By comparison, Fido doesn't offer data sharing and is "tuned to a part of the market that is in a different sort of affordability strata, and therefore lower price points, and therefore (a) lower level of support as a result."

Rogers Wireless president Brent Johnston added customers can also easily compare different brands — either online or at retailers like BestBuy that carry multiple brands or in malls with multiple retailers.

"The Fido store is very, very often close to a Rogers store and very close to a Koodo and a Telus and a Virgin and a Bell store. So it becomes very easy to walk across and ... discover the various attributes of the service offerings," he said.

The CRTC's own research on public attitudes has found there is considerable confusion about various flanker brands, which include Virgin and Lucky (Bell), Koodo and Public (Telus) and Videotron's Fizz.

Natale said that during 40 to 50 intensely busy days a year, such as Black Friday, there are often "very aggressive promotions" aimed "at a particular city, or particular retail chain or sometimes a particular shopping mall."

He also said a advocacy groups' proposal for a basic universal wireless plan, costing $25 to $30 for unlimited talk, text and 4 GB per month of data, could be possible if properly restricted to certain groups of disadvantaged users.

However, Natale said, making that level of plan generally available at that price at this time would "eradicate" the vast majority of Rogers profit and "would stop investment in totality."

He said during opening remarks that Rogers has spent $12 billion on network equipment and wireless spectrum auctions since 2014 and its debt has gone up by $6 billion over that period.

"We now sit with more debt than ever in the company's history — over $18 billion — and we're not alone. Our Canadian competitors all sit with debt leverage ratios that are at or near their maximum," Natale said.

The Competition Bureau warned on the first day of CRTC hearings on Feb. 18 that regional facilities-based carriers such as Videotron, Freedom and Eastlink would face the greatest risk from a pro-MVNO regulatory stance.

— by David Paddon in Toronto.

This report by The Canadian Press was first published Feb. 26, 2020.