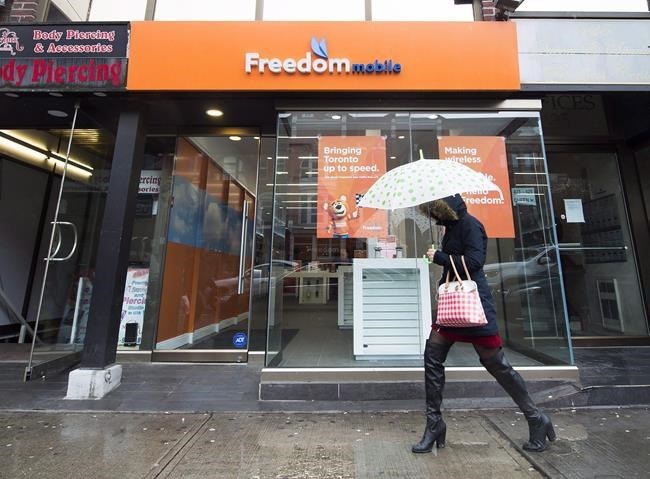 TORONTO — Freedom Mobile and its parent Shaw Communications Inc. will not participate in an upcoming wireless spectrum auction deemed crucial for the development of 5G networks — reinforcing widespread concerns about the state of competition in Canada's telecommunications industry.

As a result of Shaw's Freedom opting out of the 3,500 MHz auction, the remaining bidders — including Rogers, Bell and Telus — will face less competition for licences in the short term.

In the longer term, the Big Three may also face less competition for customers in many parts of the country because of the absence of a strong fourth carrier in Ontario, Alberta and British Columbia, where Freedom had nearly two million subscribers at the end of 2020.

Questions about Freedom's future as an independent competitor have already been raised since Rogers Communications announced plans to buy Shaw and Freedom for $26 billion — subject to approvals.

A Freedom spokesman said the company had no comment about its absence from a list of applicants for the spectrum auction. A government official confirmed that Freedom had only until Tuesday to apply.

"I think with the discussions that we've had here, there should (ring) some alarm bells for Canadians," Earl Dreeshen, a Conservative MP from Alberta, said at a Wednesday virtual hearing into the Rogers-Shaw deal.

"The odd timing of this takeover merger, before the spectrum auction, puts a squeeze that's untenable for everyone," New Democrat MP Brian Masse said at the hearing.

Freedom has Canada's fourth-largest subscriber base but is still small compared with Rogers, BCE Inc. and Telus Corp., which collectively have more than 90 per cent of the market.

The list of 24 applicants posted by the Government of Canada includes the Big Three — as well as some smaller candidates, including Eastlink parent Bragg Communications and Videotron, which is owned by Quebecor Inc.

Other applicants for the auction include Saskatchewan Telecommunications (SaskTel), which is owned by the provincial government, publicly traded cable and internet provider Cogeco and TechSavvy — an Ontario-based private company that provides internet and TV services in several provinces.

Most Liberal and opposition MPs on the committee have expressed concern over the impact on competition and some have questioned how the announcement would affect the auction — but got no concrete answers from telecom executives who cited strict government confidentiality rules.

The same committee, which isn't a regulator but plays an advisory role, questioned CRTC, Competition Bureau and Department of Industry officials Wednesday as part of their hearings into the proposed Rogers purchase of Shaw.

For the most part, regulatory officials steered away from discussing the Rogers-Shaw deal — or the spectrum auction — because the matter is being reviewed.

However, an official from the Competition Bureau told the hearing that a study prepared for an earlier CRTC review concluded that prices are 30 to 40 per cent lower where there were four independent players.

On the first day of hearings, the committee also heard Rogers chief executive Joe Natale and Shaw CEO Brad Shaw say that a combination of their companies would make the combined business more competitive — particularly against Bell and Telus — if they can avoid duplicated investments on 5G and use the money to extend and improve their networks into rural and underserved areas.

A final list of bidders will be compiled on April 22.

This report by The Canadian Press was first published April 7, 2021.