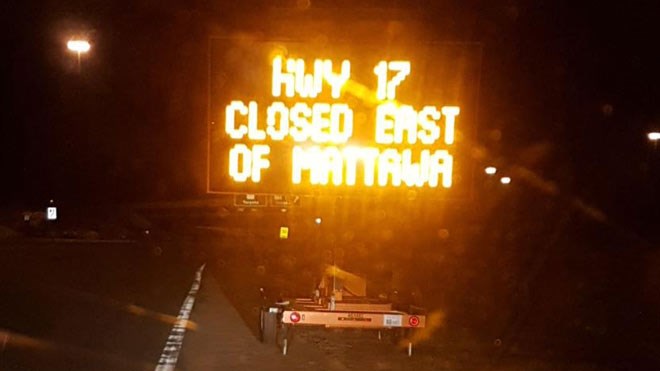 Highway 17 remains closed between Mattawa and Deep River due to a washed out portion of the highway just west of Bissett Creek, the OPP tweeted Tuesday morning.

A detour is available at North Bay via Highway 60. The highway was first closed Sunday.

The North Bay OPP said in a tweet that they've handed out several tickets to people caught driving on the closed highway.

#Hwy17 is closed at Bissett Creek (East of Mattawa) for an extended period of time due to flooding. Detour from North Bay is #Hwy60. #NorthBayOPP has laid several tickets for people driving on the closed hwy after ignoring all of these signs! Stay off the closed hwy! ^sc pic.twitter.com/FEpOhyKk34

A major stretch of Hwy 17 has been closed until further notice due to flooding and wash-out.

Both directions of the highway have been closed from Banting Drive/Wylie Road in Deep River to Powell Lake Trail in Bisset Creek.

Motorists are reminded that driving on a closed highway could result in a fine of $110 and three demerit points upon conviction.

CANADA: Trudeau urges people to keep safe outdoors from COVID-19, despite warm weather
May 25, 2020 2:40 PM
Comments
We welcome your feedback and encourage you to share your thoughts. We ask that you be respectful of others and their points of view, refrain from personal attacks and stay on topic. To learn about our commenting policies and how we moderate, please read our Community Guidelines.