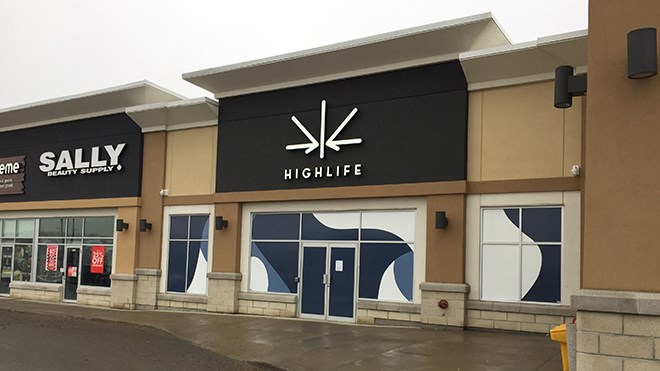 Anton Lucic, the owner of the Highlife cannabis store set to open on Marcus Drive in Greater Sudbury says he's optimistic the wait is nearly over and that he'll soon be open for business. (Heather Green-Oliver / Sudbury.com)

The owner of the Highlife cannabis store set to open on Marcus Drive in Greater Sudbury says he's optimistic the wait is nearly over and that he'll soon be open for business.

And with the province fining pot store owners who haven't opened yet $12,500 on Wednesday, Anton Lucic said he is working as fast as he can to complete the process.

But Lucic said Wednesday they're still submitting information to the Alcohol and Gaming Commission of Ontario as part of the process to get his license to operate.

“So no, we're not a hundred per cent sure when it will open, but we're trying our best to get it open ASAP,” Lucic said, adding that it's a matter of days, not weeks.

Lucic is an electrical engineer who literally won the lottery for the right to open one of two cannabis stores in Northern Ontario. The initial slate of stores total 25 across the province, and as of late Wednesday, 13 of the stores have received their licenses.

The second store, the Canna Cabana on Long Lake Road, is also waiting for its license to operate. The lottery winners for that store are tax lawyers, operating under the company name Saturninus Parnters, and are in a similar position as Lucic — hoping to get their license in the next several days. A message to Saturninus' Mike Colborne has not been returned.

The province says some stores haven't opened yet because the owners haven't submitted all the information required under law. Lucic and Saturninus are among 12 store owners who have been penalized for not opening April 1. Both will forfeit $12,500 of the $50,000 letter of credit they had to provide to qualify to operate. If the stores aren't open by April 15, they lose another $12,500, and will lose the remaining $25,000 if they still are not operating by the end of the month.

For his part, Lucic said the province is being extra careful in doing its due diligence in granting the licenses, ensuring the stores, for example, don't have connections to organized crime. But he's optimistic they will soon be done with that process, at which point they can order product from the Ontario Cannabis Store and arrange for a final pre-inspection from the province.

So far, they have hired 42 people to work at the Marcus Drive store, a mix of part- and full-time people, ranging from customer service reps (so-called 'budtenders') and full-time managers.

Once that process is complete, Lucic said he'll switch careers from engineering and move to Sudbury to focus on the business full-time.

“The greatest dispensary experience in North America,” is how he describes his goals for Highlife.

While he has no experience in the industry, and no ties to Sudbury, Lucic said he has overseen major projects in the past as an engineer, and is ready for the complexity the new legal marijuana business will bring.

He talked with a few companies involved in retail marijuana before deciding to go with the Highlife brand in Sudbury.

“I met with a few other companies and people, but I thought this was the best fit,” he said. “I don't really have any sort of experience (in retail), but like I have experience managing large  projects, handling multiple projects at the same time. And I will be moving to Sudbury when the time comes and the store opens.”

ONTARIO: Province probes licence plate defect weeks after new models were released
Feb 18, 2020 4:20 PM
Comments
We welcome your feedback and encourage you to share your thoughts on this story. We ask that you be respectful of others and their points of view, refrain from personal attacks and stay on topic. To learn about our commenting policies and how we moderate, please read our Community Guidelines.

About the Author: Darren MacDonald