Wrestling legend Hart, now 60 and cancer-free, talks life in and out of the ring

Of all the punches Bret (The Hitman) Hart threw in his professional wrestling career, the one that really sticks out left his boss unconscious on the floor in 1997.
Nov 17, 2017 2:46 PM By: Canadian Press 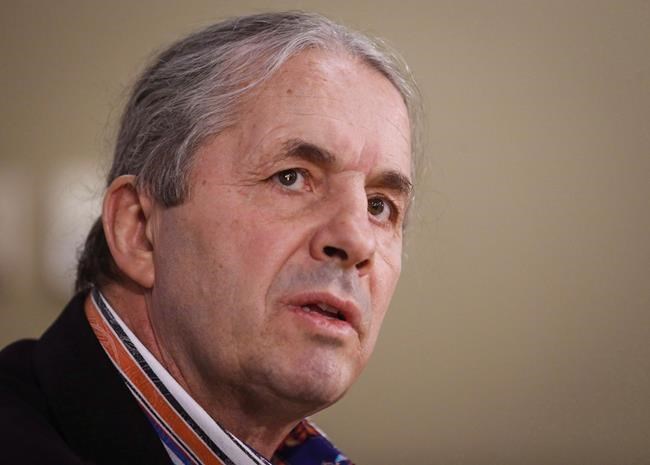 Of all the punches Bret (The Hitman) Hart threw in his professional wrestling career, the one that really sticks out left his boss unconscious on the floor in 1997.

"It was only one punch but it was such a beautiful punch," Hart said of knocking out WWE chairman Vince McMahon. "Of all the things I've ever done in my life, it was the sweetest, most beautiful punch anyone could ever throw. It was just amazing. The whole memory of it brings a smile to my face.

"I just maybe wish that I'd mopped the floor with (wrestlers) Triple H and Shawn Michaels both at the same time right after. That would have been ideal."

The episode with McMahon was the capper to the so-called "Montreal Screwjob," which the WWE (then called the World Wrestling Federation) has called the "most infamous moment" in the company's history.

In the main event of the '97 Survivor Series pay-per-view card, Hart lost the heavyweight title when the bell rang as Michaels had him in a submission move.

Hart, who was expecting other wrestlers to eventually run in to end the match, did not submit to Michaels and was perplexed when he heard the bell. The surprise finish was orchestrated by McMahon to ensure Hart dropped the title before leaving for a rival promotion.

The decision created a seismic shift in the business.

Hart would soon leave for an ill-fated run in World Championship Wrestling. WWE, meanwhile, suddenly found itself with a heel boss plotline that it played to the hilt for years.

The unexpected blast of realism from the Montreal Screwjob sent shockwaves through the theatrical world of sports entertainment.

Hart, now 60 and a grandfather, is enjoying life away from the business in Calgary. He eventually buried the hatchet with McMahon, Michaels, and the WWE.

Hart has battled some health issues since his glory days in the ring. He suffered a concussion in 2000 that essentially ended his wrestling career and had a stroke in 2002.

He was diagnosed with prostate cancer two years ago, underwent a prosectomy, and is now cancer-free. Hart's cancer was detected early, and he now preaches the importance of regular checkups.

His older brother, Smith Hart, also received a prostate cancer diagnosis around the same time. But unlike Bret, he hadn't been making regular visits to the doctor.

Smith died last July at age 68. He estimated he'd been living with the cancer for four years and didn't know it.

"I want to drive the message home to men out there: don't be afraid to go to your doctor and ask for your PSA (prostate-specific antigen) level to get checked," Bret said. "It's critical. Do your wife, your kids, your family a favour. Just go and get the blood work done."

In addition to his work as a Movember Foundation ambassador, Hart is getting notes together for a second book he plans to write over the next couple years.

"My life is pretty routine," Hart said. "I've got three grandkids and I live a pretty healthy, comfortable life up here in Calgary. I'm having a good time in this world."

Hart was born into a legendary wrestling family led by his father Stu Hart, the founder of Calgary's Stampede Wrestling promotion. The Hitman won numerous championships over his career and participated in some all-time classic matches along the way.

He was inducted into the WWE Hall of Fame in 2006.

"I got into wrestling to make some money, see the world, and meet girls," Hart said. "I accomplished that. Those were my initial goals. When I look back on everything, I'm really amazed by my career.

"I had so many wonderful guys that I worked with and great matches, that's what was most important to me — and the fans. I had a great fanbase across the country and around the world."

In a recent wide-ranging chat, Hart was at times reflective and occasionally vitriolic. He brought up that the 20th anniversary of the Montreal Screwjob had arrived, and it was clear some things still chafe at him.

"To be lied to and screwed over legitimately by people that I had worked so hard for, I think it's always been a black eye on them, not me," Hart said. "Everything I said was true, everything that I said happened, it happened the way it did."

When Hart returned to the showers after the match with Michaels, McMahon eventually made his way to the locker-room.

Hart said he told McMahon that what he had done was "of a serious nature" and that if he didn't leave the room, things would get physical.

"I think what it really amounted to was a case of Vince — and he's a very macho kind of guy — he wanted to back me down in front of everybody in the dressing room and show that he was the boss and save face," Hart said. "So he took it upon himself to put himself in a physical situation, which was laughable.

"But he put himself in that situation and I knocked him out."

An interview request to speak with McMahon wasn't returned by WWE.

The events surrounding the match remain a hot talking point among wrestling observers to this day. There are even online theories that the whole thing was a big work, masterfully played by all parties involved.

The "Wrestling with Shadows" documentary offers an interesting behind-the-scenes take on what happened. Hart also wrote about it extensively in his book.

Prichard, who was backstage that night, said on his "Something to Wrestle" podcast that only four others knew about McMahon's plan for the Montreal Screwjob: son Shane McMahon (working in production), Michaels, (associate) Jerry Brisco and (referee) Earl Hebner.

"It was business," Prichard said when reached near Houston. "It was a tough business decision to make and you have to be able to deal with the decisions that you do make and that you choose.

"So it was something that he had to do. We understood it."

Hart eventually made peace with McMahon and he even hugged it out with Michaels during an in-ring segment in 2010.

"In the end, I'm grateful for everything WWE did for me but I also know that a lot of bad went on that day and I rose through it," Hart said.

"I stand proud of what I did. And I'm glad I punched Vince McMahon out."

Matthews has OT winner as Leafs rally from 3-goal deficit to beat Blue Jackets
Aug 8, 2020 2:06 AM
Comments
We welcome your feedback and encourage you to share your thoughts. We ask that you be respectful of others and their points of view, refrain from personal attacks and stay on topic. To learn about our commenting policies and how we moderate, please read our Community Guidelines.