With Loney Bowl mess behind them, Axemen focus on daunting task of facing Western

WOLFVILLE, N.S. — The Acadia Axemen are focused on a rare chance to host the Uteck Bowl rather than the convoluted path they had to take to get there.
Nov 17, 2017 6:17 PM By: Canadian Press 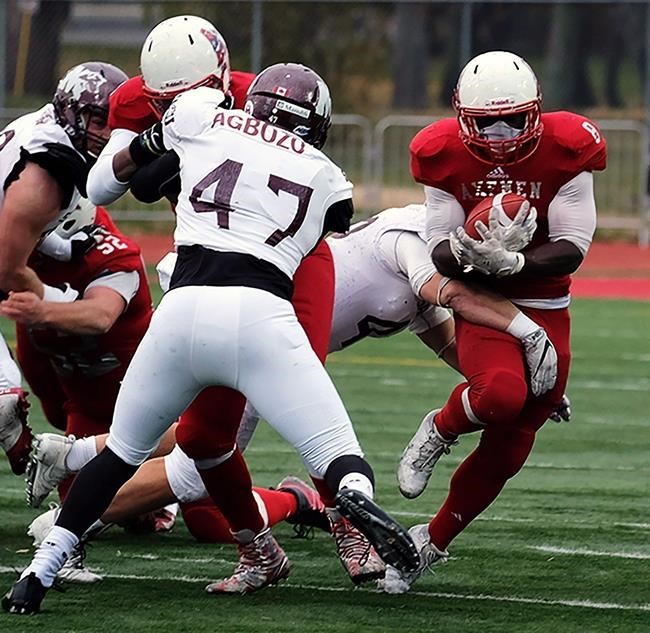 WOLFVILLE, N.S. — The Acadia Axemen are focused on a rare chance to host the Uteck Bowl rather than the convoluted path they had to take to get there.

"To host it for the first time in 41 years is unbelievably special for our program," Acadia athletic director Kevin Dickie said.

Last weekend's AUS drama unfolded in a courtroom, when the Saint Mary's Huskies successfully challenged a conference ruling on an ineligible player that had originally disqualified them from the AUS championship game. This weekend's will take place on the field, and that suits Acadia coach Jeff Cummins just fine.

Teams would normally have a tough practice on Wednesday to get ready for a game. Instead Acadia was playing the Huskies in the Loney Bowl on Tuesday thanks to the legal mess.

"We'd rather play games than practice and our players are the same way," Cummins said. "We're looking forward to strapping it up whether it's two days (rest), or three days, or 24."

The Axemen looked sharp Tuesday in beating Saint Mary's 45-38 in overtime. The victory extended their winning streak to five games.

Unfortunately for Acadia, they'll have to play the hottest team in the country on just three days rest and with limited time to review film and prepare. Western comes into game on a roll, having scored 50 or more points in its last four games and crushing Laurier 75-32 in the Yates Cup last Saturday in London, Ont.

Mustangs head coach Greg Marshall is not expecting an easier game because of the Axemen's unusual week.

"It would be different if it was us," he said, referring to himself and Cummins, both former CFL players and Grey Cup winners. "They're kids, they'll be fine. It's not a good situation, but they're making the best of it."

The last time the two teams met it was the highest scoring semifinal bowl game in Canadian university sports history. Western prevailed 55-45 in 1995 at Huskies Stadium in Halifax and with good weather conditions expected here on Saturday – sunny and 5 C – it could make for another high-scoring tilt.

Both teams have balanced offences and being able to put up yardage and points on the ground or the air makes them more difficult for defences to stop.

Cummins and Marshall are friends and know each other through coaching at the national team level, but they've never faced each other in competition.

"There will a little bit of guessing," Marshall said. "There will be a feeling-out process early in the game to see how they are going to defend and what their schemes are going to be on offence."

The Mustangs are led by quarterback Chris Merchant of Calgary who transferred to Western after playing two years of NCAA Division 1 football at the University of Buffalo.

In his second season at the helm, Merchant has blossomed as a quarterback, even with new offensive co-ordinator. He's put a lot of time in and watched a lot of film, but he's also learned how to be a player on a team full of talent.

"The biggest thing that I've learned, when you have athletes like we do on this team, is if you just do your job and rely on others to do theirs, you'll have success," he said.

On defence, the Mustangs are led by Russ Jackson Award nominee Nick Vanin, who is a medical sciences student.

The closest Western came to losing was an overtime win over Guelph on Sept. 4. Since then, they've been impersonating a steamroller.

Acadia defensive lineman Adam Melanson said the Axemen have a lot of veterans that are relishing the challenge of playing a team with Western's reputation.

"We just love playing football and we don't get too caught up in that," he said, referring the Mustangs' gaudy numbers. "We have a lot of fiery guys and we're really excited to play a team like this."