With a little help, new Canadians make a curling connection in Winnipeg 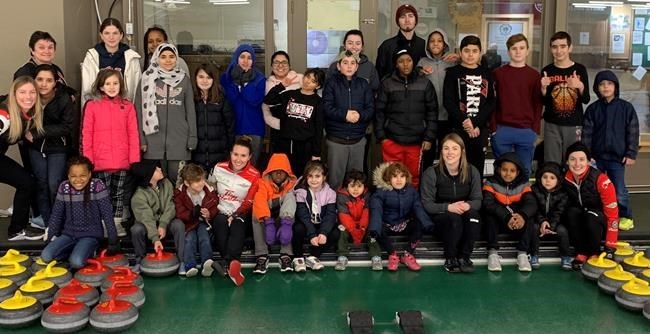 Samira Jahmoun had no idea what curling was when she and her family arrived in Canada in 2016 from Syria via Jordan.

Jahmoun, her sister and a brother stepped on curling ice for the first time in their lives earlier this month at Winnipeg's Granite Club.

"I think the thing about curling is it is a fun sport to try, especially if they come to Canada new, they will know what people play in the winter," Jahmoun said.

"I think curling, if we try it, I think we know more about Canada."

The 12-year-old's introduction to the sport was floor curling at the University of Winnipeg's RecPlex in December in a Rocks and Rings program.

"First the name, looks a little bit weird," she observed. "I said 'I want to really try it on the ice.'

"I like how you have to get the rock in, like, the house. And then if you have to knock other peoples' rocks down.

"It's slippery, you fall a lot of times. When you're doing the broom, like brooming the floor, it's fun with the other person trying to see who goes the fastest."

"Where some of these kids come from, it's about being invited into a program," Craig Baker said. "It's not just creating a program for them.

"One of the things we want to do is look for a junior program that will invite these kids to come and participate with them."

The national governing body of curling also wants to attract new Canadians, but doesn't have a program that specifically targets them.

The hope is they'll eventually cross paths with Rocks and Rings or Learn to Curl through school, a community centre or via an invitation from a local curling club.

"We're open to anybody between five years old and 95 years old regardless of ability.

"Our partnership with Rocks and Rings, I think we're at 1.5 million young kids we've introduced to the sport of curling across the country.

"Schools are obviously the melting pot of our citizenship and that's where we're going to have our biggest impact and change in demographic at the local curling club."

Lamoureux encourages curling clubs to reach out to ethnic community centres and extend invitations for an afternoon of learning to curl.

But both he and Baker acknowledge many clubs are run by volunteers and don't have the manpower to arrange that.

The Newcomer Sport Academy was the missing link in Jahmoun's case.

Carolyn Trono, who founded the academy and runs it as a volunteer, arranged a bus to transport 35 people Jan. 4 to the Granite.

"One of the barriers is transportation," explained Trono, who works for the Sport For Life Society as a director of quality sport.

"It's huge because most families don't have cars. The parents are often in language school and can't drive the kids.

"Bus tickets don't really work when you have a family of eight and they range from four to sixteen. Minus-20, they're not going to walk.

"We do a bus. We make sure they get there in a safe, predictable way."

She said when some youngsters were told they were going to curl on ice, they asked if they needed to bring skates and helmets.

"What the kids have always said to me is 'we want to play with the Canadian kids, but it's hard to break into that,'" Trono said. "You would think it wouldn't be, but it's hard.

"To feel comfortable, to feel welcome, it's more difficult than people think because they haven't been in that situation."

Curl Manitoba arranged for top-notch instruction from Kristin MacCuish, who plays lead for Tracy Fleury, and members of the Beth Peterson team currently competing in the Manitoba provincial championship.

"Here's the reason why I wanted to do curling. It's a sport that the whole family can play," Trono said. "We had some parents there that tried it.

"My dream would be wouldn't it be great if mainstream Canadian-born families could play with newcomer families?

"Sport is a great way to help families settle."

As for Jahmoun, a little social encouragement is all she needs to keep curling.

"If you have people around and people saying 'let's go. It's going to be fun', you will enjoy the sport more," she said.

In the Rings, a curling column, is published weekly.

Canadian Felix Auger-Aliassime reaches Open 13 men's tennis final
Feb 22, 2020 12:47 PM
Canada's Kingsbury finishes first in moguls for 62nd World Cup victory
Feb 22, 2020 1:35 AM
Comments
We welcome your feedback and encourage you to share your thoughts on this story. We ask that you be respectful of others and their points of view, refrain from personal attacks and stay on topic. To learn about our commenting policies and how we moderate, please read our Community Guidelines.