NEW YORK — Sheanon Williams has been suspended indefinitely by Major League Soccer after the Vancouver Whitecaps defender was charged with assault in connection with an alleged domestic incident.
Jun 16, 2017 7:03 PM By: Canadian Press 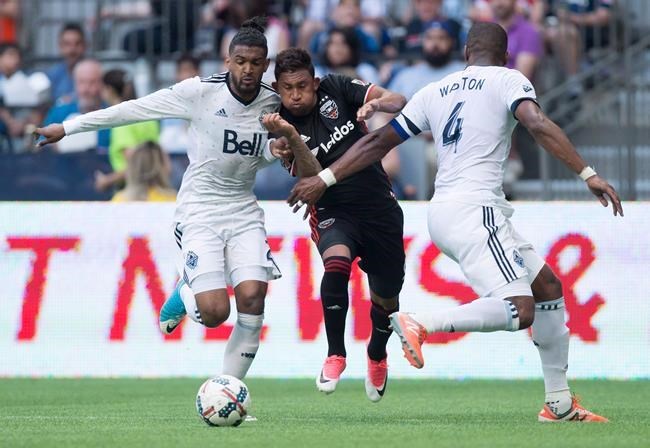 NEW YORK — Sheanon Williams has been suspended indefinitely by Major League Soccer after the Vancouver Whitecaps defender was charged with assault in connection with an alleged domestic incident.

MLS said in a release that Williams was arrested Thursday morning and is suspended pending investigations by the league and the Vancouver Police Department.

The league said Williams will undergo an assessment by MLS' Substance Abuse and Behavioural Health Program. A further determination on Williams' status will be made after the completion of the assessment and the investigations.

"We are working closely with MLS and local authorities and fully support the league's swift action to suspend the player while further investigation takes place," the Whitecaps said in a statement.

"Vancouver Whitecaps FC is a values based organization and we expect all members of the club to act in a manner that reflects our values both on and off the field."

Williams is in his first season with the Whitecaps after being acquired in December from the Houston Dynamo. The 27-year-old Boston native has helped shore up some of Vancouver's defensive woes this season after the team struggled on that front in 2016.

The five-foot-11, 170-pound right back has started in all 11 MLS games he's appeared in this season and has two assists. Williams played with the Philadelphia Union before joining Houston.

The Williams arrest and suspension is the latest ugly incident involving the team. The Whitecaps say two minors were charged with sexual assault after an incident at the team's training facility in Burnaby, B.C., last week.