Montreal Impact coach Remi Garde and his New England Revolution counterpart Brad Friedel have had similar effect on the teams they took over this season.
Apr 5, 2018 3:37 PM By: Canadian Press 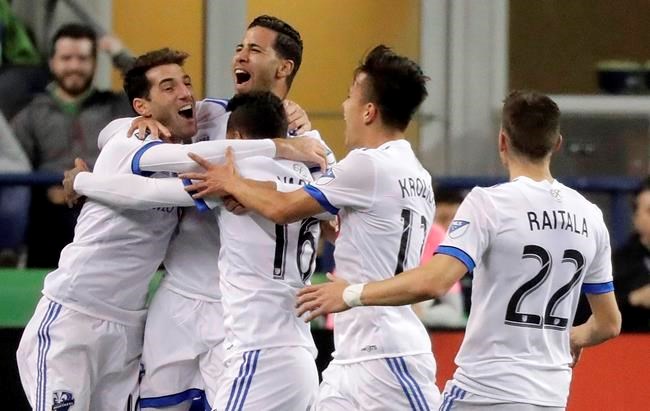 Montreal Impact coach Remi Garde and his New England Revolution counterpart Brad Friedel have had similar effect on the teams they took over this season.

Both made major player changes, banishing some familiar faces either to the bench or all the way out of town, and both have had success early in the Major League Soccer season.

The Impact (2-2) and the Revolution (2-1-1) are coming off clean sheet wins on the road heading into their meeting Friday night at Gillette Stadium.

After starting the season with two away losses, Garde's team has posted 1-0 wins over last seasons' MLS Cup finalists — Toronto FC and the Seattle Sounders. New midfielder Jeisson Vargas scored the winner at home against TFC and on the road last Saturday in Seattle.

"Everything goes more smoothly when you have two good results under your belt in two weeks," Impact defender Daniel Lovitz said Thursday. "But the approach is the same — we look to go to another place to play against a good team and get a good result."

Garde, signed in November from Lyon in France, made sweeping changes to the Impact lineup and put a new emphasis on fitness and sound defensive play.

His use of a five-man back line, with three central defenders plus two on the wings, looks to have sealed the holes in what last year was a leaky defence.

Lately, Victor Cabrera, newcomer Jukka Raitala and recent arrival Rod Fanni have played in the middle, with Lovitz on the left side and either Michael Petrasso or Chris Duvall on the right. Recently acquired French centreback Rudy Camacho wasn't used in Seattle but could make his debut in New England if Garde dares to change a winning lineup.

"Playing with five — or three — at the back has been a different look, but after the first win at home I think there was a huge momentum shift for us, just to get the ball rolling in the right direction and get three points," said Lovitz. "Seattle was a great place to get three points and New England's another one, this time in-conference."

Friedel, a former English Premier League goalkeeper with Aston Villa and Tottenham, brought nine new players to New England. Last week he sat former mainstays like Kelyn Rowe and Juan Agudela on the bench, and he has used 23-year-old Matt Turner in goal ahead of 11-year veteran Brad Knighton.

Going with new guys like Ecuadorian Cristian Penilla and Colombian Luis Caicedo seems to be working. Last week, the Revolution blanked the Dynamo 2-0 in Houston to go unbeaten in three straight games.

It will be the fourth time in five games that Montreal plays on artificial turf, including their only home game against Toronto at Olympic Stadium. That may affect Garde's lineup decisions depending on who is nursing injuries. Forward Matteo Mancosu is expected to sit out a third straight game with a sore calf muscle.

The coach has also had to manage energy levels with only a short break after travelling to the west coast.

Midfielder Saphir Taider had it especially tough, having spent the international break with Algeria's national team in Africa, then travelling to Seattle.

"I think we've all had time to recover," said Taider. "It's never easy for a team to travel so much and play away, but we did what we needed to do.

"We were solid, we won the game and that gives confidence to the whole group."

Taider was confined to the bench for both Algeria games and was accused by coach Rabah Madjer of lacking fitness, which is at odds with the midfielder's workhorse performances in MLS this season. But it appears unlikely he'll be called back.

"I'm focused on my club," said Taider. "Here we have one of the best strength and conditioning coaches from France (Robert Duverne).

"A lot of things are said in football, a lot of lies. But as players we have to stay focused."