Toronto FC collected another trophy on Sunday as the Supporters' Shield was paraded around BMO Field.
Oct 15, 2017 5:31 PM By: Canadian Press 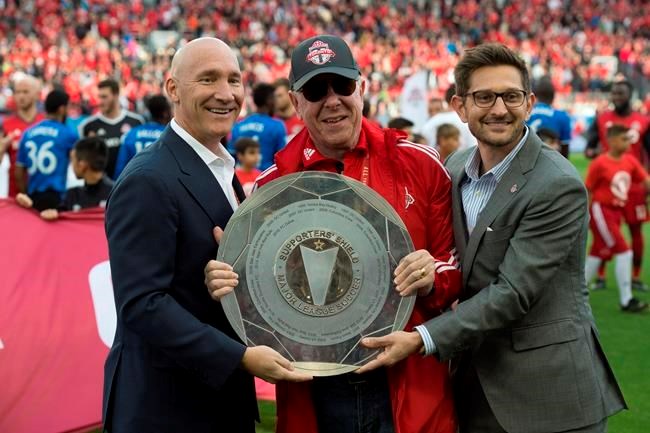 Toronto FC collected another trophy on Sunday as the Supporters' Shield was paraded around BMO Field.

The Supporters' Shield, introduced by organized fan groups, is awarded annually to the supporters of the team with the best regular-season record in Major League Soccer. The trophy is worth US$130,000, paid into the Toronto team bonus pool.

It also means that Toronto has home-field advantage throughout the playoffs.

The presentation took place prior to Toronto's regular-season finale against the Montreal Impact. Toronto was 19-5-8 going into the match.

Supporters group representatives from TFC and FC Dallas, who had ownership of the trophy after topping the table last season, emerged from the tunnel prior to the game for the trophy handover.

The MLS crowns its champion via the playoffs. Still the Supporters' Shield carries weight in a sport where the regular season decides the champion in most leagues around the world. And given Toronto kicked off the season March 4, it is symbolic of excellence over seven-plus months.

It's the second trophy for TFC this season. Toronto won the Voyageurs Cup on June 27, defeating Montreal 3-2 on aggregate in the Canadian Championship final.

Toronto clinched the Supporters' Shield on Sept. 30 with a 4-2 home win over the New York Red Bulls. But the trophy had to be officially handed over.

Eleven different MLS clubs have won the Supporters' Shield in the league's 21-season history, with both the L.A. Galaxy and D.C. United claiming the trophy a record four times.

Toronto is the first Canadian side to win the trophy.

Toronto is bidding to become the first team in league history to win the treble: the MLS Cup, Supporters' Shield and the U.S. Open Cup or Canadian Championship. A domestic double has been won 13 times.

Toronto has been on a record run this season.

TFC is also the first team in league history to have two six-game win streaks in a single season.