TORONTO — After the U.S. flamed out in World Cup qualifying, Michael Bradley and Jozy Altidore needed some home-town club love. They got it Sunday with a 1-0 win over the Montreal Impact, marking the home finale to a record regular season.
Oct 15, 2017 9:06 PM By: Canadian Press 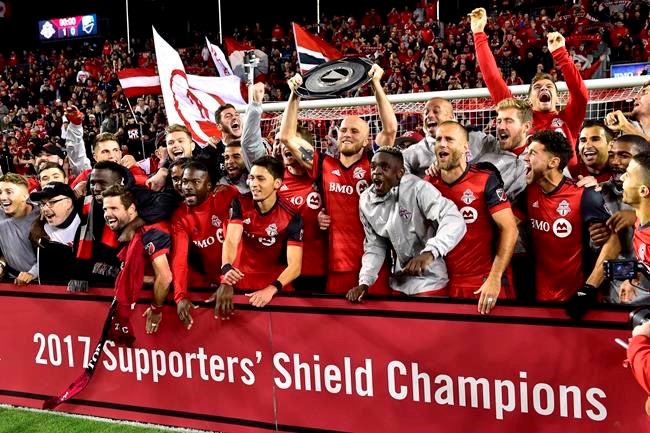 TORONTO — After the U.S. flamed out in World Cup qualifying, Michael Bradley and Jozy Altidore needed some home-town club love.

They got it Sunday with a 1-0 win over the Montreal Impact, marking the home finale to a record regular season. Altidore scored the lone goal in the 16th minute, joining his teammates and fans after the match to celebrate taking possession of the Supporters' Shield trophy that goes to the MLS team that tops the regular season standings.

It was a wild game that had a bit of everything, from bizarre bounces to missed penalties — entertaining for the 27,866 fans on hand at BMO Field if not the two coaches.

"This was probably the strangest 1-0 game that I've ever been part of because it could have very easily been 6-5 or something like that," said Toronto coach Greg Vanney

When the dust settled, Toronto (20-5-8) had tied the league's single-season points mark of 68 set by the 1998 Los Angeles Galaxy. Vanney and assistants coaches Dan Calichman and Robin Fraser were members of that Galaxy side, which collected its points total in 32 games during the league's shootout era.

Toronto also tied the 2014 Seattle Sounders for the league record for regular-season wins (20) in the post-shootout era.

TFC has a chance to break both records in the regular-season finale next weekend in Atlanta.

For Altidore, Sunday's celebrations came at the end of a tough week.

"It's been probably one of, if not THE, toughest periods of my life," he said. "Definitely the darkest three days I've probably had. I didn't leave the house, I really didn't do anything.

"But then I remember I'm in a special place and quickly I'm reminded just going to get a coffee, seeing somebody in a TFC shirt and them saying how much it means to them how well the team's done. I'm just reminded of how special of a club that I'm at, the city and the opportunity that I have."

Bradley, who captains both the U.S. and Toronto, also appreciated the love. "Absolutely," he said with a smile.

While Toronto got the win and was in control as the clock wore down, it was hardly the kind of shutdown performance Vanney will have wanted with the playoffs looming.

"I would say a lot of them in there know that tonight we needed to be sharper, we needed to be better and that's going to be what they're thinking about tonight, not necessarily the Supporters' Shield," he said of his players.

As for the slumping Impact (11-16-6), they have now lost four straight and eight of their last nine.

"We played a good game," he said. "We created chances. I think we played well enough to at least to get some goals there ... In the end you've got to take your chances."

Altidore's goal came after a Marky Delgado pass deflected off a Montreal player to the U.S. international, who beat Maxime Crepeau with a low shot to the corner. The goal survived a video replay look, seemingly for offside.

Montreal was irate, arguing that Impact striker Matteo Mancosu had been fouled by defender Chris Mavinga at the other end prior to the Toronto buildup. They seemed to have a good case.

Prior to the game, Toronto took possession of the Supporters' Shield, which made the rounds of the south stand during the game. The TFC players posed with the trophy, which looks like a giant silver Frisbee, after the match.

Toronto striker Sebastian Giovinco, back after a four-game injury absence (quad), missed two cracks at a penalty in the dying seconds of the first half after being brought down by Victor Cabrera. He hit the post on the first attempt, only to be awarded a second go after referee Ted Unkel ruled Crepeau had come off his line.

He had, but only after a stutter-step move by Giovinco that the Impact deemed illegal. Perhaps justice was done when the Italian hit the base of the left post again on the second try.

The craziness continued early in the second half when Cabrera's long curling shot went off one post and then the other. The ball then bounced off Alex Bono but the Toronto 'keeper managed to claw it back before Mancosu could bang it in.

Giovinco had several excellent chances throughout the game but could not buy a goal.

Unkel managed to infuriate both teams within the first 30 minutes of a game, awarding three yellow cards but ignoring several other incidents.

While the sun was out for the late-afternoon kickoff after a brief pre-game monsoon, the conditions were spotty with a driving wind going north to south. It made for a somewhat loose, albeit end-to-end game.

With Giovinco back from injury, Toronto rolled out all its big guns.

The Impact, eliminated from the playoff picture last weekend, made seven changes from the team that lost 2-1 to Colorado last time out. Star attacker Ignacio Piatti sat out with a knee injury with starts for 18-year-old midfielder Ballou Tabla and the 23-year-old Crepeau.

Montreal wraps up its season at home to the New England on Sunday, when it will honour captain Patrice Bernier in his final game.