HARRISON, N.J. — Teenager Alphonso Davies made quite the impression on his Canadian teammates on Friday.
Jul 7, 2017 10:44 PM By: Canadian Press 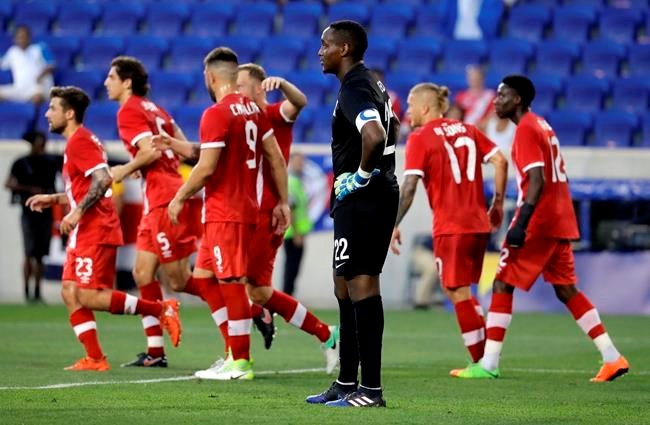 HARRISON, N.J. — Teenager Alphonso Davies made quite the impression on his Canadian teammates on Friday.

The 16-year-old scored twice as the Canadian men's soccer team beat French Guiana 4-2 on Friday to begin competition at the 2017 CONCACAF Gold Cup.

"What do you want to say? He's 16 years old," said 37-year-old Canadian captain Patrice Bernier. "It's not easy because it's only his first start ever for Canada and comes out and scores two goals.

"He's got pace, he's got ability and he's a very calm and mature for his age. He's able to do things at his age that I wasn't able to do at his age."

Davies stole the show, scoring both of his goals in the second half and providing a glimpse at the talent Canada is hoping will get it back to relevance in international soccer. Dejan Jakovic and Scott Arfield also scored for Canada in the first half.

"When the game started going I got more comfortable. I was a bit nervous and shaken up at the start but I got my feet wet," said Davies.

After Canada had gone up 3-0, Roy Contout and Sloan Privat scored two-minutes apart with about 20 minutes remaining.

Jakovic was largely unaware that he had given Canada the lead when an Arfield free kick hit his ribcage and deflected into the goal in the 28th minute.

Arfield, however, knew exactly what he was doing when he picked up a loose ball that had deflected off a French Guiana player and put away a tidy finish from just outside the 18-yard box before halftime.

Davies, who only recently acquired his Canadian citizenship and has impressed with the Vancouver Whitecaps this season, was played in all alone in the 60th minute and showed a lot of poise to convert his breakaway.

Things got nervous about 10 minutes later when, suddenly the heavens opened-up and under pounding rain, it was a one-goal game. First, Contout headed in a corner kick and then Privat scored from close-range in the 71st.

"It was good enough for three points and at the end of the day, that's what matters," said head coach Octavio Zambrano.

"It didn't really quite happen the way we wanted but I saw glimpses of what I want from this team."

Nerves were settled with five minutes remaining when Anthony Jackson-Hamel of the Montreal Impact found Davies open on the left side. Davies had the time and showed plenty of maturity to pick his spot and score with a low shot.

Canada travels to Houston to play Costa Rica on Tuesday at BBVA Compass arena. The Canadians finish the group stage next Friday in Frisco, Tex., against Honduras.