MARKHAM, Ont. — After getting punched in the jaw during Canada's weekend rugby loss to Romania in Edmonton, Tyler Ardron found himself chatting with his assailant at the post-game meal. Hooker Otar Turashvili, it seems, is good company off the field.
0
Jun 20, 2017 5:20 PM By: Canadian Press 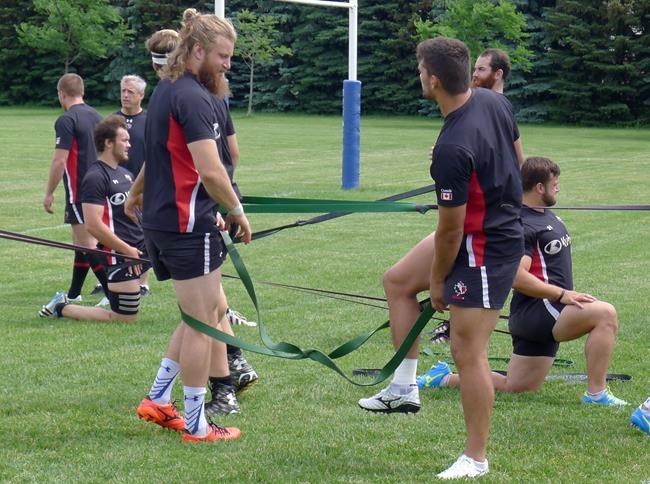 MARKHAM, Ont. — After getting punched in the jaw during Canada's weekend rugby loss to Romania in Edmonton, Tyler Ardron found himself chatting with his assailant at the post-game meal.

"There's not many sports you do that in," Ardron said with a smile.

"He just said he was sorry. I just laughed and said 'That was pretty dumb,'" Ardron added.

Turashvili agreed. While his red mist will likely cost him a suspension, the Romanian's manners quickly returned after the final whistle.

That rough-and-tumble camaraderie is what drew the six-foot-four 242-pound Ardron to rugby.

"I played every sport, to be honest," said the 26-year-old from Lakefield, Ont. "It was just the community of rugby that really kept me in it and wanted me to do it. And the travel once I got into the sevens (Canadian team).

"I liked all the sports, but everything around rugby outside of the actual game is so much better than the other sports I played."

The tradition of sharing a post-game drink or meal with your opponent lives on, but Canadian coach Mark Anscombe says travel and other demands of the pro game make it more difficult.

"It's nice to (do it)," said the New Zealander. "You play them once a year, twice a year, that's what the sport's all about — building friendships and bonds and that. But you don't get it all the time and I suppose in all professional sports it's something we're getting less and less of, unfortunately."

Rugby continues to take Ardron around the world. Out of contract after four distinguished seasons with the Ospreys in Wales, he is headed to New Zealand later this year after signing with Super Rugby's Chiefs.

It's as big stage as there is in club rugby.

"Everyone's very proud of him and what he's done," said Anscombe. "He's a good footballer."

Brett Beukeboom's frosted hair is living proof of the Canadian team's camaraderie. Late for a recent meeting, the co-captain literally had to roll the dice to determine his punishment under the team rules.

"He went for the tips. He looks a little bit like the Backstreet Boys now," he added.

If there was such a thing as a six-foot-five 249-pound boy band singer, that is.

That team bond will be tested Saturday when 23rd-ranked Canada hosts the 17th-ranked U.S. Eagles in the first leg of a Rugby World Cup qualifier at Hamilton's Tim Hortons Field. The second leg of the aggregate series goes July 1 in San Diego.

The playoff loser has another chance to qualify via a two-game playoff with No. 18 Uruguay, the lone survivor left in South American qualifying. That winner slots into Pool D as Americas 2 with No. 4 Australia, No. 7 Wales, No. 12 Georgia and Oceania 1.

The loser of the Uruguay series has one more chance, via a world repechage.

Canada wants to qualify sooner rather than later, so it can focus on what lies ahead and take care of the logistics.

The games were not without drama, however.

Take Turashvili's punch, for example. Ardron did, knocked to the ground by the force. The Romanian was red-carded for the blow while Ardron, who got under his rival's skin by hanging onto his foot after a ruck, got a yellow card — sending him to the sin-bin for 10 minutes.

The yellow seemed harsh, Ardron was told. "I would agree but I don't make the calls," he said with a smirk.

But by refusing to swing back, he helped his team.

"It's not major. We're just looking after them," said Anscombe.

Winger Sean Duke is out of commission with a back injury.