TORONTO — Rowdy Tellez doesn't think much is going to change for him on the Toronto Blue Jays, even as he is being asked by the team to share first-base duties with Vladimir Guerrero Jr.
Jul 11, 2020 4:40 PM By: Canadian Press 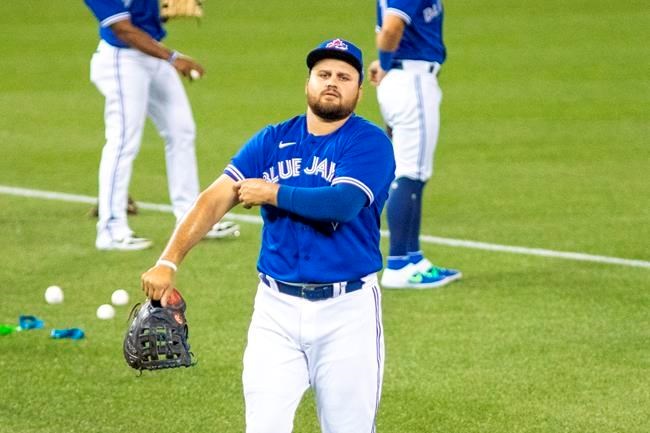 TORONTO — Rowdy Tellez doesn't think much is going to change for him on the Toronto Blue Jays, even as he is being asked by the team to share first-base duties with Vladimir Guerrero Jr.

The Blue Jays announced that Guerrero would be moving from third base to first on Friday, platooning with Tellez who was the presumptive starter at first heading into the season. Tellez said the next day that he doesn't think much will be changing for him despite the competition at his position.

"Having him over there is just as beneficial as having him at third," said the 25-year-old Tellez. "I think we just want as many bats as we can have in the lineup.

"Him being right-handed, me being left-handed, it plays into that platoon situation. I think having all of us in the lineup is going to be beneficial and we're just here to win."

Blue Jays manager Charlie Montoyo agreed, noting that he wants to put out the best possible lineup every day in the shortened 60-game season.

"I'm a big fan of Rowdy Tellez, I've always been a fan of the kid," said Montoyo. "He's having a good — if you want to call it this — spring training. His approach at the plate looks really good.

"I don't think anything has changed when it comes to him. He can rotate into that designated hitter spot, he can also play first. If he keeps swinging the bat the way he has, he's going to see a lot of playing time."

Tellez hit .227 with 21 home runs and 54 runs batted in 2019, his first full season in Major League Baseball. He was hitting .238 through nine spring training games before the break.

Tellez said he has been helping Guerrero adapt to the new position, working with the 21-year-old on the intricacies of fielding at first base, especially foot work.

"He's always asking questions, he wants to learn, he's always trying to be better," said Tellez. "He's a great teammate to start with so he's not too worried about certain things like playing time or any of that, he just wants everyone to be happy and at their best."

Tellez stayed with his father and sister in California when spring training was suspended due to the COVID-19 pandemic. He said he's neighbours with his trainer, who has a gym in his garage. Tellez also built a batting cage at his house to keep working on his hitting in the down time.

"Nothing's changed with the swing or the mentality," said Tellez, who said he worked with teammate Bo Bichette and Bichette's father, former MLBer Dante Bichette. "Just coming back I'm feeling really good. I liked where I was when I left spring training, I was very confident with the work I put in during quarantine."

This report by The Canadian Press was first published on July 11, 2020.