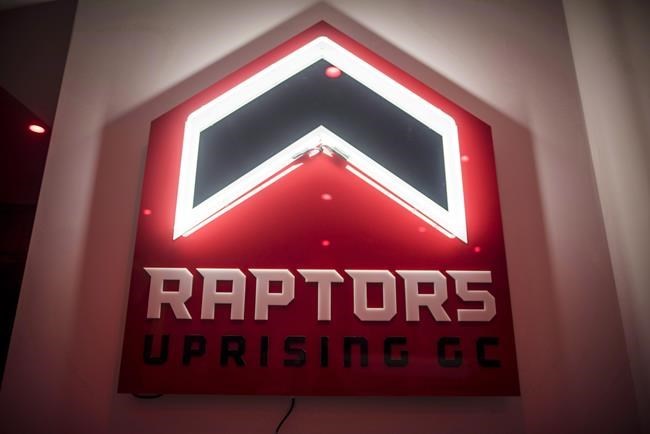 Including tournament play, Toronto (16-0) is a remarkable 25-0 this season.

It's been an amazing turnaround for an esports team that missed the playoffs last season.

Donald, who played for Kings Guard Gaming in 2018 but was suspended last year for violating the league's social media guidelines, was a key pickup. He leads the league in steals per game (4.2) and true shooting percentage (90.5), the first player to lead the league in both categories.

Hailey, a stylish scoring machine who has won a slew of honours already this season, came into the final week averaging 34.7 points a game.

Visiting Cleveland was force-fed a diet of dunks and three-pointers Friday in going down 95-67 and 90-47 in the best-of-three series. The Cavs led just once all evening, at 9-8 in Game 2.

"Like we say, (the) job ain't done," added Donald. "We just got started. We're waiting on the playoffs."

Hailey made his first 12 shots in Game 1 en route to a 41-point performance. An overwhelming favourite for season MVP, the 30-year-old former AT&T distribution co-ordinator from Memphis made 17-of-20 shots.

Hailey led all scorers with 48 points in Game 2. He shot 87.8 per cent over the two games, making 36-of-41 shots include 6-of-7 from three point range. Hailey added 15 assists and eight steals.

Blazer5 Gaming held the previous records for both single-season wins and consecutive regular-season wins at 14 — both set last year during a 14-2 campaign.

Toronto also extended its own record for consecutive wins to start a season (the previous mark was 10 by Mavs Gaming last year).

Regular-season games were one-off contests in the league's first two seasons before switching to best of-three series in remote play this year. A series win equals one regular-season victory in 2020.

While the top-seeded Raptors have rewritten the league record book this season, they know that doesn't mean success in the post-season. Blazer5 Gaming tipped the regular-season standings both of the previous two years — with 14-2 and 12-2 records — but fizzled out in the first round of the playoffs each time.

Toronto has already had a lucrative campaign, winning two in-season tournaments: the $160,000 Tipoff and $260,000 Turn. The Raptors collected $187,000 of that in becoming the first team in the league's three-year history to win the first two tournaments in the same season.

Toronto made its first five shots in Game 1 and led 23-16 after a first quarter that saw them hit all five three-point attempts. The Raptors reeled off a 12-0 run to open the second quarter and led 51-32 at the half.

Toronto shot 86 per cent in the first half, hitting 19 of 22 shots including all eight shots from beyond the arc. The Raptors stretched the lead to 76-43 going into the fourth.

The Raptors made 18-of-21 shots in the first half of Game 2, building a 48-26 lead at the half with Hailey scoring 26 points. The beatdown continued with the Raptors dominating a 24-11 third quarter.

Cavs Legion (4-12) have lost their last nine in all competitions.

The two teams have ties.

Jerry Knapp came to Toronto from Cleveland in a May 2019 trade that sent Trevion (All Hail Trey) Hendrix the other way. The Raptors traded Mendoza to Cleveland last October for a second-round pick.

The Cavs took Destiny (JoshJay) Idugboe, a Toronto native, in the fourth round of the 2020 draft.

Cleveland came into Friday's game with a 3-1 career record against Toronto, knocking the Raptors out of the 2018 playoffs.

The Raptors twice set the single-game scoring record this season (June 12 in 109-51 win over Celtics Crossover Gaming and July 16 in 112-62 victory over Pacers Gaming).

That record was erased twice Thursday, first by Jazz Gaming in a 113-65 thrashing of the Cavs and then in Bucks Gaming's 133-83 victory over Lakers Gaming.

Toronto also became the earliest in league history to qualify for the post-season, after a July 2 series win over Gen.G Tigers.

This report by The Canadian Press was first published Aug. 7, 2020.