TORONTO — Norman Powell wasn't expecting to sign a contract extension with the Toronto Raptors when he showed up to training camp last month.
Oct 8, 2017 3:21 PM By: Canadian Press 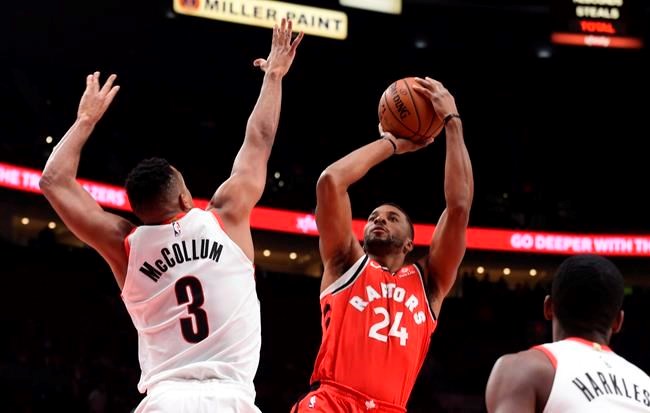 TORONTO — Norman Powell wasn't expecting to sign a contract extension with the Toronto Raptors when he showed up to training camp last month.

The 24-year-old, who was set to become a restricted free agent at the end of the season, said his plan was to play his game and see what happened at the end of the year. But when the Raptors offered him a multi-year deal, Powell couldn't turn that down.

"I love Toronto, I love the city, I love my teammates. I think we have something special here," Powell said Sunday after the team announced the extension. "I think this city and the country as a whole represents who I am — being the underdog, being overlooked constantly. ... that's been my entire career.

"So I love everything about this organization and my team and this is the place I want to be."

A Raptors official confirmed the four-year extension to The Canadian Press on Thursday after it was first reported by ESPN.

The team did not disclose financial details of the deal, which was reported to be worth US$42 million.

"I was in shock, you know. It's a big thing when you're looking down at the cheques of what the offer's going to look like," Powell said with a smile. "It's crazy, especially the way I grew up struggling just trying to make it.

"It still hasn't sunk it yet, I don't know when it will but it's a great feeling to have."

"Norm is a young, athletic and versatile player who has worked extremely hard to improve each season," Raptors president Masai Ujiri said in a release. "We view Norm as a significant part of our team going forward."

Powell was selected by Milwaukee with the 46th overall pick in the 2015 NBA Draft. The Raptors acquired him on draft night from the Bucks along with a protected future first-round pick in exchange for guard Greivis Vasquez.

Powell posted averages of 8.4 points, 2.2 rebounds and 18.0 minutes in 76 appearances last season. He scored in double figures 31 times, including six games with 20-or-more points and led the bench in scoring 13 times.

Powell proclaimed at training camp that he's in the best shape of his life after a gruelling off-season regime that included three workouts most mornings — at 5 a.m., 7 a.m., and 9 a.m. — at different gyms. His rest was the 15-minute drive between gyms. The reason behind the laborious schedule, he explained, was to train his body while fatigued.

When the Raptors bade farewell to Canadian guard Cory Joseph, DeMarre Carroll, and Patrick Patterson this past off-season, it swung open a door for young players such as Powell. The six-foot-four Powell is expected to either start or be the first option off the bench.

"I'm ready for it," Powell said on media day of the chance to play major minutes this season. "It's what I've worked for. It's what I've fought for my first two years."