Montreal is shutting down two downtown blocks tonight to allow people to cheer on a team from the city's traditional bete noire: Toronto. The very notion would have seemed far-fetched, until Monday night.
0
Jun 13, 2019 4:00 AM By: Canadian Press 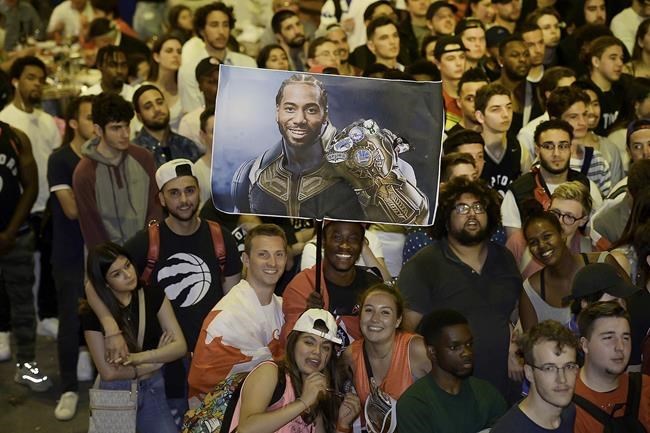 Montreal is shutting down two downtown blocks tonight to allow people to cheer on a team from the city's traditional bete noire: Toronto.

The very notion would have seemed far-fetched, until Monday night.

That's when several thousand enthusiastic fans turned up for the impromptu "Jurassic Park" on Peel Street to cheer on the Toronto Raptors in a losing effort against the Golden State Warriors.

"We were all Canadian that night and it was very emotional," said Alain Creton, head of the Peel Street Merchants' Association and owner of Chez Alexandre, a popular Parisienne brasserie.

Creton said he was astounded by the number of young people from all backgrounds who were crammed up against his terrace that night.

On Wednesday, Mayor Valerie Plante announced the city will do it again Thursday night — this time on both Peel and Crescent streets — as the Raptors attempt to eliminate the Warriors in California and capture their first NBA championship.

For one of the key figures championing an expansion NBA franchise for Montreal, the gatherings — and the Raptors' exhilarating run — have only served to help his own long-term goal.

"It certainly validates our findings that basketball is indeed very popular in Montreal," former senator Michael Fortier told The Canadian Press on Wednesday.

"This run ... has demonstrated to people that don't live in Canada that our interest in basketball isn't just concentrated in the GTA."

Fortier was at Toronto's Scotiabank Arena for Monday's tilt, but saw video of the massive Montreal gathering, estimated in the thousands.

"When I saw the video, I didn't initially believe it, because it looked like Jurassic Park (in Toronto)," Fortier said. "But I'm not surprised. You go to bars, you go into restaurants, public places where there are TV sets and when game time comes, people are all watching it.

"I don't think it's just a fad — I think there's a keen interest in basketball."

The decision to create a Montreal Jurassic Park — dubbed "Jurassic Peel" in these parts — came at the last minute. The block was already closed because of Canadian Grand Prix festivities and the promoter suggested they keep it shut for the Raptors game.

"We decided it late on Sunday night and we only had part of the day Monday (to promote it), we didn't even tell the media, we just put it on Facebook," Creton said.

Among those on hand Monday night was Canadian singer and Raptors fan Karl Wolf, who has felt the Montreal-Toronto rivalry on both ends of the spectrum having lived in both towns.

He wasn't surprised to find Montrealers rallying behind the only Canadian NBA team.

"Toronto and Montreal are the two coolest Canadian cities, they're like cousins, and I can say that I'm from both," said Wolf, who studied film at Concordia University.

Jason Bruvier and Sadja Rebah, French nationals living in Montreal, had been looking for a place to watch Game 5 when they caught wind of Montreal's own party.

"Since the beginning of the playoffs, I was waiting for Montreal to get its Jurassic Park," Bruvier said, wearing a retro purple Raptors jersey.

"In their minds, they know they have the support of an entire country and even many Americans who want to see the Raptors win," Rebah assured.

Bruno Delorme, a sports marketing lecturer at Concordia and McGill universities, said such a turnout is a good indicator for Montreal's own hoops dreams.

"Perhaps not in the short, short term but in the medium- to long-term, it means a lot," Delorme said. "It says a lot for the future of basketball — there was already a fan base before and the interest is growing."

And the relative youth of the fan base is a big plus.

"Sports is all about generating new fans, younger fans, it's about grassroots marketing," Delorme said. "Of the big four (sports), NBA basketball fans tend to be the youngest audience."

Last October, a group of Quebec businesspeople revealed they want to bring an NBA franchise to Montreal — without using public funds.

They made the declaration despite expansion not being on the table for now for the 30-team league.

"We're fine with that, we are confident that they will get there but they hold all of the cards," Fortier said. "We want to be ready as a city to respond to an expansion proposal."

Fortier said the plan — preparing a financial package and talking to potential Canadian and foreign investors — continues in earnest.

"We've continued to meet with investors and our plan our remains the same: we hope to raise $2 billion as soon as possible in order to be ready when the league announces it's creating an expansion committee and will be inviting bids from cities across North America and maybe beyond," Fortier said.

Stephan Cretier, CEO of the security firm GardaWorld, has already agreed to contribute up to 10 per cent of the new team's value — about US$200 million.

Beyond investors, the group also needs to convince NBA stakeholders of Montreal's potential.

"It's one thing to have the financial package, it's another to get a team," Fortier said. "They're two very different paths, and the one to get a team requires on our part some position for Montreal."

Fortier said some people's perceptions are rooted in the city's late-1990s post-referendum malaise, and they may not realize Montreal and its economy have transformed dramatically.

"I suspect it's the same thing at the league: Around the owner's table, not everyone is up to speed on what's been taking place in Quebec and in Montreal," he said.

— With files from Ugo Giguere in Montreal.