TORONTO — There were undoubtedly times this season when Kyle Lowry questioned his future in Toronto. Every NBA player experiences frustration from time to time, said Masai Ujiri, and Lowry is no different.
0
Jun 20, 2017 3:44 PM By: Canadian Press 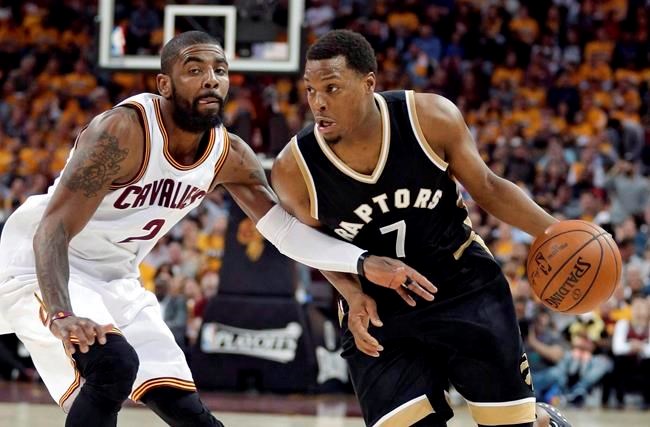 TORONTO — There were undoubtedly times this season when Kyle Lowry questioned his future in Toronto.

Every NBA player experiences frustration from time to time, said Masai Ujiri, and Lowry is no different.

But the Raptors president insisted Tuesday morning that his three-time all-star point guard, whose team was swept by the Cleveland Cavaliers in the second round of the playoffs, wants to remain in Toronto.

"He's been a part of our organization, and he says he wants to come back," Ujiri said. "I know, speculation. . . with the article, we all have ups and downs, there are times when he's been down, and there are times when we are down. It happens to every team, every player. People go through it."

The Raptors boss was responding to a report that claimed the 31-year-old Lowry has "zero interest" in re-signing with Toronto once he becomes an unrestricted free agent on July 1.

Lowry took to Twitter on Monday night to refute the report.

Two days before the NBA draft in Brooklyn, Ujiri met with the media to share his thoughts on the draft. But with free agency also just around the corner, much of the conversation centred on Lowry's immediate future during what Ujiri called "rumour season."

"Everybody is going to make a big deal out of everything," Ujiri said. "I know what Kyle has told me. Kyle has been here working out, he actually just left (the Biosteel Centre, where the team trains). So I know what he has been telling me. I can only believe what he tells me, not the famous 'sources.'"

When several teammates were in town last week, Ujiri noted, Lowry took them along to a pilates class.

Lowry, who earned US$12 million this past season, led the Raptors to the second round of the playoffs before missing the last two games against Cleveland with a sprained ankle. He stands to double his salary on the free agent market.

In an NBA post-season that shone a spotlight on three-point shooters, Lowry, the team's best long-range shooter, was sorely missed.

"I think we have the ability to shoot the three. I don't think we shot the three well," Ujiri said. "Yes, it's something we're paying attention to and we hope to get better at. I think there was emphasis on that because obviously Kyle didn't play a couple of those games, and we just didn't shoot the three ball well as a team."

Ujiri said the Raptors are prepared for whatever happens after July 1, when Serge Ibaka and Patrick Patterson also become free agents.

"Any direction we are going, I think we are prepared," he said. "We're excited about our free agents and if it goes the other way, we are excited, too. We have to prepare for all of that.

"I think it's a good time for us. Looking at the league, looking at where everybody is and all the action, hey, we are in this thing to compete and to get better so we'll see where it takes us."

The Raptors have the 23rd pick on Thursday. Ujiri said Tuesday's assignment for staff was going through players "that we don't like. Why don't we like them?"

"Last year we thought the draft ended at eight, but then we got (Jakob) Poeltl," Ujiri added — the Raptors selected the talented Austrian at No. 9 last year. "That's just how it is. It's a huge process for us now, and I think as the day rolls, tomorrow comes and Thursday comes, you get more and more comfortable with that pick."

Some solid players have gone at 23, including Chicago Bulls forward Nikola Mirotic in 2011.

Ujiri also said he has made a decision on a general manager — former GM Jeff Weltman was hired away by Orlando last month as the Magic's president — saying "I'm sitting on it for now. I have made a decision and probably will announce it in a couple of days."

Bayern beats Dortmund, closes in on 8th straight Bundesliga
May 26, 2020 5:43 PM
Comments
We welcome your feedback and encourage you to share your thoughts. We ask that you be respectful of others and their points of view, refrain from personal attacks and stay on topic. To learn about our commenting policies and how we moderate, please read our Community Guidelines.