QMJHL players to be handed 15-minute penalties for fighting

LONGUEUIL, Que. — The Quebec Major Junior Hockey League has approved new rules that dole out stiffer punishments for fighting. All players involved in a fight will now receive a 10-minute misconduct penalty and a five-minute major.
Sep 30, 2020 8:34 PM By: Canadian Press 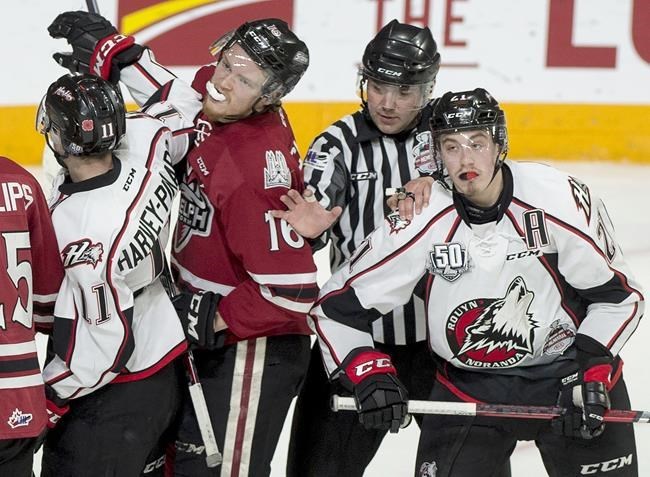 Anyone deemed to be an instigator will also get a two-minute minor.

The amended rules will see players automatically handed a one-game suspension after their third fight, plus another game suspension for each additional skirmish.

Representatives from the league's 18 teams in Quebec and the Maritimes voted on the new rules in a video conference on Wednesday.

The changes will be in effect when the regular season begins on Thursday.

"It's very important to protect our players, to make sure he's playing in a safe environment. And today in the hockey business, the way that the game has improved, it's based on speed, skill (not fighting)," Courteau told reporters Wednesday.

The stiffer penalties come after Isabelle Charest, the minister responsible for sport in Quebec, called on the league to ban fighting.

The league is seeking $20 million in government assistance to help cover revenue lost due to the COVID-19 pandemic.

Courteau said the rule changes were not a condition for receiving financial support from the province.

“That part of the discussion I had with the sports minister was very clear. She said to me ‘I will never impose anything to the Quebec Major Junior Hockey League,'" he said.

The commissioner added that the minister asked him to look at the rules and see if there was a way to reduce the number of concussions in the league.

"I gave her my word that I would work on it, which I did," Courteau said.

Charest lauded the rule changes in a tweet on Wednesday, saying the league made an important gesture.

"This issue has concerned me for several months, Charest's post read. "My priority is that young players are safe. This is the start of a culture change in hockey!"

The QMJHL is asking Quebec for financial assistance because provincial health officials have said they cannot have fans in the stands when the season begins this week, Courteau said.

“The financial support from the Quebec government was important for us to have our teams back on the ice at the right time," he said.

The situation is different for the six Maritimes-based teams, where some spectators will be allowed, Courteau added.

This report by The Canadian Press was first published Sept. 30, 2020.

World champion backstroker Kylie Masse racing again after pandemic layoff
Oct 30, 2020 3:10 PM
Comments
We welcome your feedback and encourage you to share your thoughts. We ask that you be respectful of others and their points of view, refrain from personal attacks and stay on topic. To learn about our commenting policies and how we moderate, please read our Community Guidelines.