Austin Pasztor is living proof the draft isn't the only path to a productive NFL career. The six-foot-seven, 308-pound offensive lineman is preparing for his seventh season and second with the Atlanta Falcons despite not being drafted.
Apr 26, 2018 3:34 PM By: Canadian Press 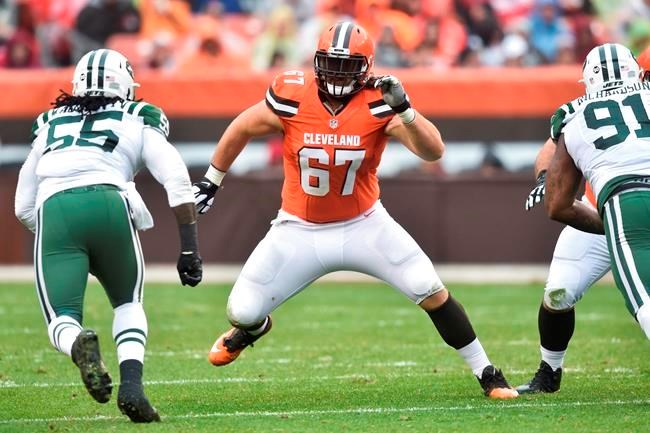 Austin Pasztor is living proof the draft isn't the only path to a productive NFL career.

The six-foot-seven, 308-pound offensive lineman is preparing for his seventh season and second with the Atlanta Falcons despite not being drafted. After being bypassed in 2012, the Langton, Ont., native joined the Minnesota Vikings as an undrafted free agent.

"I was disappointed (being undrafted) but I was definitely aware it wasn't a definite or sure thing," Pasztor said via telephone ahead of the 2018 draft in Arlington, Texas. "What's important is getting a training camp invitation to get yourself in front of the coaches.

"They've already studied your film, they've talked to your coaches . . . what they can't tell is how you practise, how you carry yourself to meetings. When you get the chance to do that, that's when you need to make the most of it. That opportunity really counts in the end."

The reality is drafting players is hardly an exact science. In 2016, only 10 first-round selections opened the season as starters. Twenty-two draftees didn't make their team's 53-man roster.

According to the Elias Sports Bureau, last year there were 456 undrafted players on opening-day rosters, including 64 rookie free agents.

What's more, four starters in last year's Super Bowl were undrafted free agents. Corey Clement had 100 yards receiving and a TD while LeGarrette Blount ran for 90 yards and one touchdown in Philadelphia's 41-33 win over New England while Danny Amendola led the Patriots with 152 yards receiving and Chris Hogan had 128.

Pasztor was released by Minnesota but started 12-of-15 games in 2013 with the Jacksonville Jaguars. He played with the Cleveland Browns in 2015-16 before joining the Falcons last season.

Jacksonville defensive tackle Eli Ankou is another Canadian playing in the NFL after being undrafted. Following last year's draft, the six-foot-three, 325-pound Ottawa native signed with Houston before joining the Jaguars.

Another path to the NFL is via the CFL. One of the most notable players to take that route is defensive end Cameron Wake, a five-time Pro Bowler and 2012 first-team All-Pro over 10 seasons with Miami.

After being released by the New York Giants, Wake joined the B.C. Lions in '07. Over two seasons, Wake was named the CFL's top rookie and twice its best defensive player before returning to the NFL.

Other examples include punter Jon Ryan and centre Brett Jones.

Ryan, a 36-year-old Regina native, is entering his 11th season with the Seattle Seahawks. He began his career in 2004 with the Winnipeg Blue Bombers before joining the Green Bay Packers in 2006.

Jones, 26, of Weyburn, Sask., is preparing for his fourth year with the Giants. Jones was the CFL's top rookie in 2013 and outstanding lineman the following year after helping the Calgary Stampeders win the '14 Grey Cup.

One of the NFL's longest-tenured Canadians is Dallas long-snapper L.P. Ladouceur. The six-foot-five, 255-pound Montreal native signed with the Cowboys three games into the '05 season.

Last month, Dallas re-signed the 37-year-old and with good reason. Ladouceur has never missed a game or snap with the Cowboys, appearing in 205 contests and making 1,875 snaps on converts, field goals and punts.

Pasztor said a love of football is crucial for young players.

"It's vitally important because there are times in everyone's career when it gets to a point where it's extremely challenging," he said. "But if you truly love the game you're able to push through and when you see the fruits of that it keeps your motivation going.

"You must understand you're constantly being evaluated and all you can ask of yourself is do your very best. Sometimes players will slip up and if you're the steady, consistent engine that's always working and striving to be your best then you can come out on top even among players who might be more talented."

"In Minnesota, I didn't feel like I was going to make the team but I thought I had a chance to be on the practice squad and even that didn't seem like it was a consideration and it sort of broke my heart. It took a while but in time I became a better player and you just keep chalking up those kinds of things and next thing you know you've been in the league for a while."