REGINA — It's amazing how things have changed for the Ottawa Redblacks and the Saskatchewan Roughriders since their initial meeting of the season on June 20.
Aug 23, 2019 7:04 PM By: Canadian Press 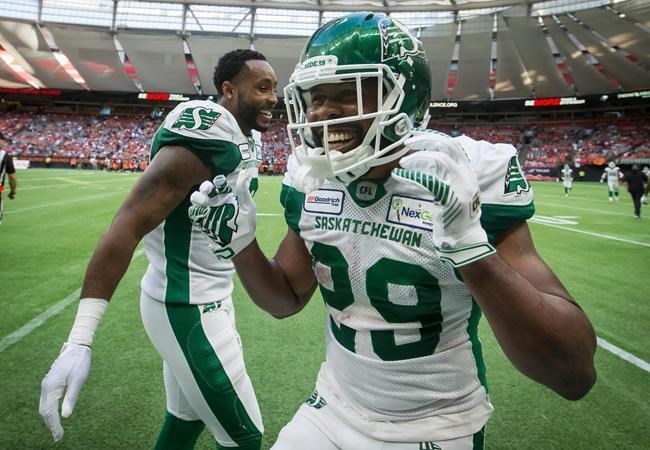 REGINA — It's amazing how things have changed for the Ottawa Redblacks and the Saskatchewan Roughriders since their initial meeting of the season on June 20.

The Redblacks won a 44-41 shootout at TD Place in Ottawa, improving their record to 2-0 while the Riders fell to 0-2. In the ensuing nine weeks, however, it's been a total role reversal for the teams as the Redblacks have gone 1-6 while the Riders have won five of six, including the last four in a row.

The teams meet again on Saturday night at Mosaic Stadium.

Running back William Powell, who spent the previous three seasons with the Redblacks (3-6) before signing with Saskatchewan as a free agent in the off-season, was confident the Riders (5-3) would find their way despite their early struggles.

"We weren't worried about going 0-2. We know we have a lot of talent in the room and we know we just had to put it all together and build our chemistry," said Powell, who is fourth in the CFL with 527 yards rushing. "We had a lot of new pieces come in and once we found our little groove, we started rolling. We just want to continue to get better and keep it going."

In the June 20 victory, Redblacks quarterback Dominique Davis was outstanding, completing 30 of 39 passes for 354 yards and three touchdowns. Receiver Dominique Rhymes also had a strong game, catching 11 passes for 168 yards and one touchdown.

Davis, who has missed two games this season due to injury, has struggled of late. In the five games he's played since the Redblacks started 2-0, he's thrown just two touchdown passes while being intercepted seven times.

Davis understands that fans are upset with the struggles but he believes if he puts in the work, the Redblacks will return to their winning ways.

"I just go to work each day. I know the guys in the building believe in me and that we're going to get this thing turned around," said Davis.

When asked if there was a reason for Ottawa's recent difficulties, Davis had a quick answer.

"We're just not finishing games," said Davis. "Other teams have been making a few more plays than us. It's been those few plays that have been determining a win or a loss for us. It's been falling on the loss side lately but we're doing our best to get back on the win side."

The Redblacks have scored just three offensive touchdowns in their last 79 possessions over the last six games. Yet despite Ottawa's struggles, no one in the Riders dressing room is taking Saturday's game for granted.

"We don't talk that way. We really preach respecting your opponent, respecting the game, respecting the process. When we start hearing things like it's a sure victory, we don't buy into that," said Riders head coach Craig Dickenson. "This is pro football and every team is good, every team has good football players and the coaches are prepared. We're confident right now, we're playing good football but we're not sloppy. We're not overconfident."

Dickenson isn't expecting many changes from Ottawa, but he's making sure his players don't underestimate the Redblacks.

"I don't know if they changed a lot schematically. You can just tell that their confidence is not what it was in that second game and that indicates they're a dangerous team," said Dickenson.

"When they start rolling, they've got the ability and the people to make some good things happen. It just hasn't worked out for them the last few games. I'm sure the coaching staff is emphasizing getting their rhythm back and trying to be a more confident bunch so it's important we start fast because it's the same guys we saw in Game 2. They still are a dangerous team."

LAUTHER'S IN: Kicker Brett Lauther returns to the Saskatchewan lineup after missing five games with a groin injury. Rookie Gabe Ferraro, who connected on seven of nine field goals attempts as Lauther's replacement, returns to the practice roster.

AT HOME ON THE ROAD: The RedBlacks are 1-4 at home this season and 2-2 on the road. They are 3-1 in their last four visits to Regina. Ottawa has also won the last four meetings between the teams.

MANNY BY THE NUMBERS: Saskatchewan receiver Emmanuel Arceneaux, with 8,202 career receiving yards, is 40 yards away from breaking into the CFL's top 40 all-time receivers. Darrell K. Smith currently sits in 40th place with 8,242 yards. Arceneaux has also extended his consecutive reception streak to 105 games. He has five catches in four games this season

QMJHL Roundup: Lessard scores twice as Val d'Or beats Rimouski 5-1
Nov 29, 2020 7:26 PM
Jaguars fire general manager Dave Caldwell following 10th straight loss
Nov 29, 2020 6:02 PM
Buffalo Bills hold off Los Angeles Chargers for sloppy 27-17 win
Nov 29, 2020 5:03 PM
Comments
We welcome your feedback and encourage you to share your thoughts. We ask that you be respectful of others and their points of view, refrain from personal attacks and stay on topic. To learn about our commenting policies and how we moderate, please read our Community Guidelines.