TAMPA, Fla. — A quick look at the Raptors schedule for the second half of the shortened NBA season had Nick Nurse already thinking about managing minutes.
Feb 24, 2021 8:49 PM By: Canadian Press 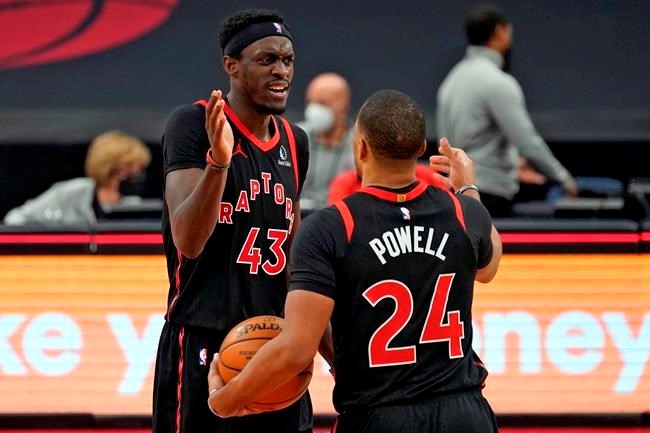 TAMPA, Fla. — A quick look at the Raptors schedule for the second half of the shortened NBA season had Nick Nurse already thinking about managing minutes.

A gruelling four-game western road trip that sees Toronto play four games in six days at Denver, Utah, and Los Angeles against the Clippers and Lakers highlights the Raptors' second half of the season.

"It looked busy. It looked busy. Looked like a lot of games. Felt like a (United States Basketball League) schedule," Nurse joked before the Raptors tipped off against the Miami Heat on Wednesday.

The USBL was a pro spring league that folded in 2008.

"You used to say 'Oh you've got a back-to-back here in a couple weeks,' and now you've got one every week, so that thought can go past your head," Nurse said.

"In all seriousness though, there's got to probably be a look at -- I haven't done it yet -- but thinking about managing that. I think that maybe getting more guys on the floor in certain situations and maybe using a deeper roster in some fashion or other. I'm kicking those ideas around in my head, or I'll start to. I'll probably leave that for a few days."

The NBA announced the schedule in two halves this season in order to add make-up games for COVID-19 postponements. The Raptors haven't had any games postponed. The season has been shortened to 72 games, further compressed because of the Tokyo Olympics, which open July 23. The NBA Finals could go until July 22.

The Raptors tip off the second half on March 11 against the visiting Atlanta Hawks, one of 19 games at their temporary home at Amalie Arena in Tampa. They'll play 35 games in total in the second half.

The Raptors will make four U.S. national television appearances. Their April 24 game at New York will be televised by ESPN, while TNT is broadcasting the May 4 game versus the Clippers in Los Angeles. NBA TV has the Raptors games April 11 at New York and May 2 against the Lakers in L.A.

The Raptors' longest homestand is five games from April 13 to 21. They play eight back-to-back sets.

This report by The Canadian Press was first published Feb. 24. 2021.