PARIS — Canadian Milos Raonic caught a break Friday at the French Open as he needed less than a half hour to complete a third-round victory over Spain's Guillermo Garcia-Lopez. Raonic, the No. 5 seed from Thornhill, Ont.
0
Jun 2, 2017 1:42 PM By: Canadian Press 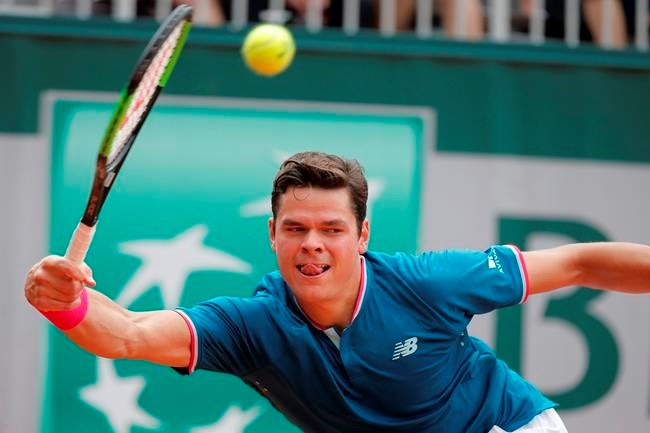 PARIS — Canadian Milos Raonic caught a break Friday at the French Open as he needed less than a half hour to complete a third-round victory over Spain's Guillermo Garcia-Lopez.

Raonic, the No. 5 seed from Thornhill, Ont., advanced when Garcia-Lopez retired from the match due to a left thigh injury. The Canadian, who was leading 6-1, 1-0 at the time, said he can use the extra rest.

"I'll take it when I can have it," Raonic said. "I've played a lot over the last weeks. I'm playing well. I'm happy with the way I was able to start today. I think I've made good progress and I'm getting better and better each match.

Garcia-Lopez needed treatment at the end of the first set. Raonic had a 12-2 edge in winners and recorded five aces over the 28-minute contest.

Next up for the Canadian is a fourth-round match against 20th-seeded Pablo Carreno Busta of Spain, a 7-5, 6-3, 6-4 winner over Bulgaria's Grigor Dimitrov.

"I watched a bit of his match today, he's playing well," Raonic said. "He's improved a lot over the last 16 months or so. I played him a few times toward the end of last year. He's very solid, he's disciplined, he shows up and he's there and he doesn't exit the match, you really have to beat him.

"You have to take it to him. So it's going to be about trying to get control and trying to hold on to it throughout the match."

Raonic did not drop a set in their three previous head-to-head meetings. He won on grass at Wimbledon last year and beat him twice on hardcourts later in the season.

Raonic is making his sixth career appearance at Roland Garros. His best result came in 2014 when he reached the quarter-finals.

Kane grateful for other pioneers ahead of her own Sports Hall of Fame induction
May 30, 2020 3:43 PM

Toronto FC's Jozy Altidore ready to game for a good cause in 'Call of Duty' event
May 30, 2020 2:20 PM
Comments
We welcome your feedback and encourage you to share your thoughts. We ask that you be respectful of others and their points of view, refrain from personal attacks and stay on topic. To learn about our commenting policies and how we moderate, please read our Community Guidelines.